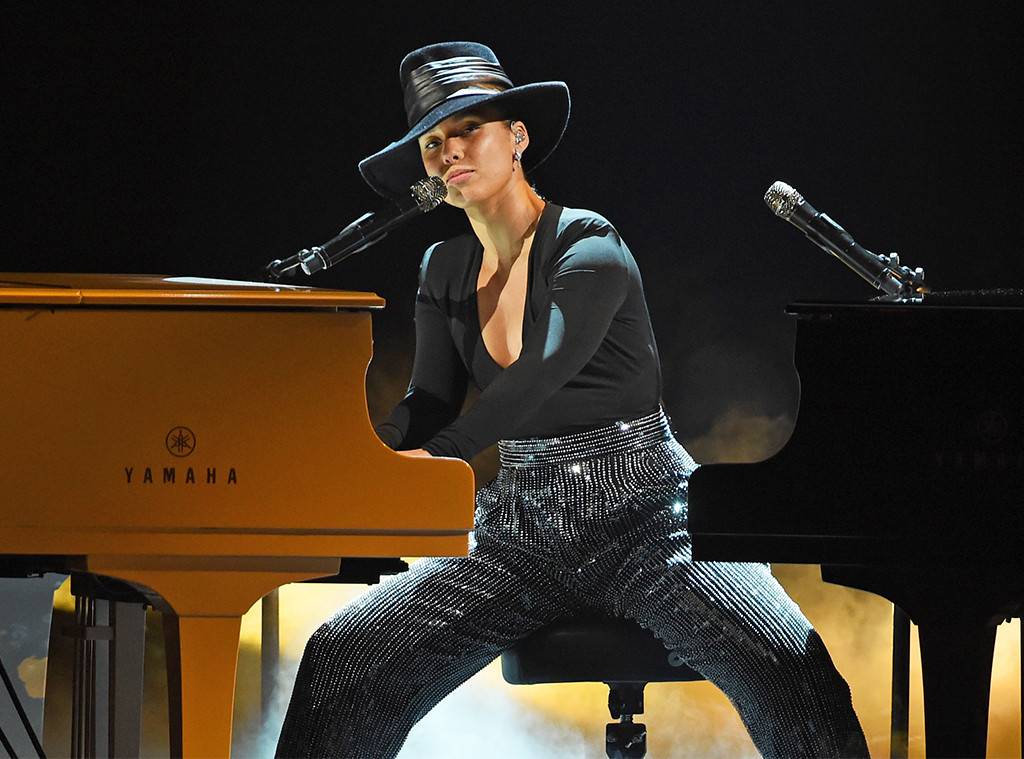 The 61st annual Grammys were a mixed bag of amazing performances, career-defining debuts, and general confusion.

Opening up the show was none other than Fifth Harmony expatriate Camilla Cabello performing her inescapable and Grammy-nominated Havana (Live) set in one of the most elaborate Grammy stages shows the show has seen in years, a highlight of this year’s show was the extreme production detail the showrunners brought to LA’s Staple Center.

Tonight’s performance was based on my grandma’s childhood in Havana growing up in a “solar habanero”, basically a house in which every family live in a room- it was a poor community but she loved it because there was music everywhere, she was never happier #Grammys

Using a Cuban styled backdrop, YoungThug popped in for his verse and then show upped its Latin flair as Camilla was joined by legendary trumpeter Arturo Sandoval and gay latin pop icon Ricky Martin performing the Cup of Life which further pushed the show in the most culturally diverse performance it has had in had in years. Pulling out a hat trick, J. Balvin joined the quartet to perform the hook of his global hit Mi Gente san Beyonce, who had already won an award in the pre-show for The Carters Everything is Love. If there was ever a moment to mashup every hot nominated latin artist respectfully, this was it.

Directly after the phenomenal first mashup of the evening, 15-time Grammy award winner Alicia Keys appeared to perform her duties as the evening’s host, but to keep in line with the Grammys new women-focused initiative, she introduced some of the most influential women of our time including Michelle Obama, Lady Gaga, Jennifer Lopez and Jada Picket Smith.

It's already a night to remember at the #GRAMMYs. ? @MichelleObama has arrived! pic.twitter.com/F142ju4otY

After some uplifting words from women, the stage turned to Shawn Mendes, performing on an acoustic piano, doing a heartfelt rendition of In My Blood, before returning the songs to its rockier roots with surprise guest, Miley Cyrus, who performed the second verse and created a powerful rendition of the singers lead single from his latest eponymous album.

.@MileyCyrus and @ShawnMendes singing "In My Blood." Truly the best of both worlds. #GRAMMYs pic.twitter.com/lOrI9e0iIb

Now it was time for the awards, first up, Best Pop Duo or Group performance with Lady Gaga and Bradley Cooper winning for Shallow, written by Gaga for her currently award-sweeping A Star is Born.

Next up was Golden Hour singer, Kacey Musgraves, singing new single Rainbow, though a vocally solid and emotive performance, KM’s performance was quickly overshadowed by what was to come.

After a day of rain at the Staples Center, @KaceyMusgraves is the rainbow hangin’ over our heads right now. #GRAMMYs pic.twitter.com/kYDGzOYQZf

W-O-W! @JanelleMonae is giving us an unforgettable #GRAMMYs performance and we're here for it. ? ? pic.twitter.com/4cqjbOQwSu

Performing her ode to sexual empowerment, Make Me Feel, mashed up with her ode to the vagina, Pynk, Janelle Monae channeled her secret cowriter Prince and made sure the crowd knew exactly what “black girl magic” by the time she was finished.

"Let the vagina have a monologue!" – @JanelleMonae #GRAMMYs pic.twitter.com/9SzYEXPhYN

Following the performance that made Lady Gaga lose her shit, Alicia Key’s returned to the stage recounting the time she knew she was going to win the Grammy for Song of the Year for If I Ain’t Got You, but ultimately lost to John Mayor for his song Daugters, something John agreed with, so he broke his Grammy in half and shares custody with Alicia Keys.

This genuinely sweet moment was all a giant setup to announce the Song of the Year winner, with an absent Childish Gambino winning his first of many of the nights awards.

Song Of The Year – This is America by Childish Gambino

Awarded to the songwriters of a song only, which include Childish and his producer Ludwig.

Bringing the party back was someone who should probably stop getting face-tattoos, Post Malone, whose performance had a little trouble because of ICE detaining and deporting 21 Savage. In lieu of the newly outed Brit, Post was joined by LA rock legends, the Red Hot Chili Peppers, though the stage was Post’s to perform, Anthony Kiedis and crew quickly showed up the burgeoning star.

We probably think that we are better now that @PostMalone and @ChiliPeppers are on the #GRAMMYs stage. pic.twitter.com/jLrxqUVaYJ

Actress @AnnaKendrick47 introducing the one and the only @DollyParton and a sensational group of songstresses. #GRAMMYs pic.twitter.com/xi76P1hwBt

Then Anna Kendrick introduced one of the first of many tributes of the evening with Katy Perry, Kacey Musgraves, Miley Cyrus, Marren Morris, Little Big Town, and Dolly Parton honoring the latter’s illustrious career, singing some of her greatest hits, and a new cut.

"9 To 5" is such a classic. It was a great GRAMMY moment to see the Country Queen, @DollyParton joined on stage with @MileyCyrus, @KatyPerry, @MarenMorris, @KaceyMusgraves, @littlebigtown, and @RealLindaPerry! pic.twitter.com/YvGhbxJa5v

When H.E.R. took to the stage, it was clear that this year Grammys would focus far more on performance and not on doling out awards in public, which made H.E.R.’s performance of Hard Place a welcome addition to a set of performances that thus far had included some true hits and some awkward misses. This career-defining performance was one of the top 3 of the evening, and they generally only got better from here on out.

It’s hard to think that anyone could top H.E.R.’s electric performance, but as a straight cut from Hard Place to a classical pianist opening up the next set, it was clear that Cardi B didn’t come to play. As one of the most involved, anticipated and high energy performances of the evening, Money literally tore down the stage.

We're with you @iamcardib!
We born to flex (Yes) ?
Diamonds on our neck ?#GRAMMYs ✨ pic.twitter.com/hf6FHe679u

If by now you’ve thought to yourself “where are the awards” Meagan Trainor came out just in time to answer that question, giving out the third award after an hour of the telecast. Joined by fellow artists, announced Kacey Musgraves as the winner of Best Country Album for Golden Hour.

In another one of the many memorable moments of the night, Alicia Keys came back to the center stage to sing a medley of chart-topping songs that she wished she had written using two parallel grand pianos to show both her showmanship and giving a nod to her peers ending with the song she was happy she wrote, Empire State of Mind.

Us trying to balance achieving our career goals and keeping up a social life #GRAMMYs pic.twitter.com/BQSGcDlbK8

We're with you @DanAndShay, it only hits us this hard when we taste . . .
"Tequila." ?#GRAMMYs pic.twitter.com/Md5ssFHZqr

Following Alicia Keys’ extreme mashup of every hit song that came to mind, Dan and Shay performed an emotional rendition of Tequila, which they won a Grammy for Best Country Duo/Group Performance, which also acted as a lead into them announcing the winner for Best Rap Song, which went to wheelchair Jimmy himself, Drake.

Everyone at the #GRAMMYs is a winner tonight according to @Drake. ? pic.twitter.com/sQ1NqKXQ7m

Back from commercial, Alicia Keys praised legendary honoree Diana Ross, who then came to the stage introduced by her 4 foot 9, 9-year old grandson.

It's official: @DianaRoss' grandson has the cutest #GRAMMYs performance introduction of the night. ? pic.twitter.com/tITfJMnKOc

Performing some of her biggest unifying hits and triumphantly telling herself “happy birthday,” while putting Jadyn Smith on the spot during Reach Out And Touch Somebodies Hand, Ross commanded both the room and the stage.

Back to the stage for a promised performance of her Oscar-nominated song Shallow, Lady Gaga came to the stage to perform with the songs co-writers, producer Mark Ronson and Miike Snow’s Andrew Wyatt.

Once again flipping the Grammy’s on its head, James Blake, Mike Dean, and Earth Wind & Fire‘s Phillip Bailey performed a mashup with Travis Scott, ending with Travis’ latest single No Bystanders. This performance was definitely one of the most confusing of the night, both in execution and pairings, but thank god it wasn’t another repeat of last week’s Super Bowl.

Today's #GRAMMYs marks @trvisXX's second Sunday in a row of live performances on CBS and @CBSAllAccess. No word yet on next Sunday. He's being cagey about it. https://t.co/spnl63og72 pic.twitter.com/s532eGUer9

Continuing the night of tributes, and dividing the general public on in a slew of confusing choices, Jennifer Lopez led a Smokey Robinson x Motown tribute for the ages having everyone from host Alicia Keys, Ne-Yo, and even Smokie Robinson himself. Now, why J. Lo was the face of an iconically black record label is anyone’s guess, but why J.Lo was salsaing was no ones.

Following this was the newest boyband to watch, BTS, announcing the winner for Best R&B Album, which went to the best performer of the evening, H.E.R.

It takes a village to get to the #GRAMMYs, and Best R&B Album winner @HERMusicx knows it. pic.twitter.com/OxG7e3ZBdq

Keeping the night moving as the concert that it had become, Kelsea Ballerini introduced iconic singer-songwriter, Brandi Carlisle, to perform one of the most emotive moments of the night with her Song of the Year contender The Joke.

Next up Leon Bridges and Charli Wilson introduced Beyonce’ protege’s Chloe x Halle paying tribute to Donnie Hathaway before announcing Best Rap Album which went to Cardi B for her major label debut, Invasion of Privacy which left her virtually speechless. It should be noted that Chloe x Halle DID THAT, and were vocally superior to almost anyone who graced the stage that night.

Winding down the show was that 70s show star Wimer Valderrama introducing new Grammy-winners St. Vincent, singing My Seduction, and Dua Lipa emerging from the shadows to move into a seductive refrain of Aretha Franklin‘s Respect which smoothly moved into a Dua Lipa’s Calvin Harris-assisted One Kiss which then flowed back into a great mashup, which ended up being the perfect lead into Allesia Cara and Bob Newheart announcing the Best New Artist winner, Dua Lipa.

Best New Artist winner @DUALIPA is bowing to all the fellow noms, and of course, her fans. #GRAMMYs pic.twitter.com/sPVTeFDnxg

Rounding out the night was iconic Jimmy Jam to say goodbye to the longest running Grammy-president and CEO, Neil Portnow, who spearheaded major legislation to make sure that musicians get paid and credited fairly. Neil’s exit lead into the in memorium that lead into the Aretha Franklin tribute performed by Fantasia, Yolanda Adams and a strangely dressed Andra Day.

Closing out the show Alicia Keys announced Record of the Year, which went to Childish Gambino and his longtime collaborator, and the person who scored Black Panther, Ludwig Goransson.

Record Of The Year – This is America by Childish Gambino

Awarded to the artists, producers, engineers, and mixers; basically, everyone but the writers if not the previous. This win is historic for multiple reasons, but first and foremost, it is the first time in history when a rap/hip-hop song has won record of the year.

As the wrap music began playing faster and faster in the last 3 speeches, Alicia Key’s knew it was time to wrap up the show and hand out one of the most coveted awards of the year, Album of the Year which went to a highly confused Kacey Musgraves.

Album Of The Year – Golden Hour by Kacey Musgraves

Awarded to the artists, featured artists, and songwriters on an album and any producer, engineers, or mixer that have a third or more of playing time of the album’s total. Everyone in the room, including Kacey seemed to be shocked, and she echoed Drakes earlier sentiments about not living or dying by the award.