The 88 key MIDI controller is probably the least popular key configuration for a bedroom producer, but the most popular for a studio and the accompanying studio musicians. Full blown production can generally be tackled by the smaller key sets in the 49 through 76 key ranges when it comes to using a controller to work “in-the-box” with 88 key MIDI controllers and workstations being reserved for the pros and composers.

Here are our top picks for 88-Key MIDI Keyboard Controllers in 2019: 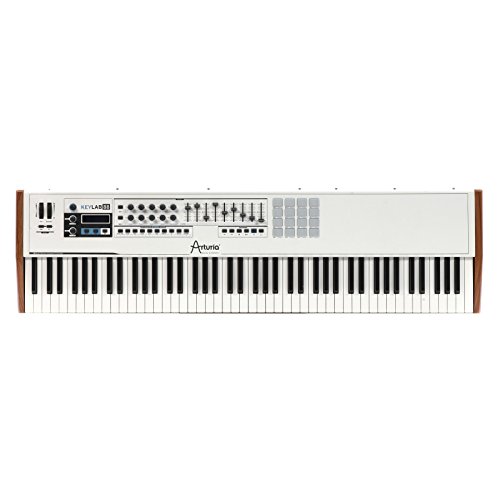 Aside from the fully-weighted bed of keys, the Keystation Pro 88 was flush with 24 programmable knobs, 8 faders and an array of buttons. In short, M-Audio tried to replace the need of buying a workstation if you had a rack, and SOMETIMES it worked. Which brings us to today’s model. 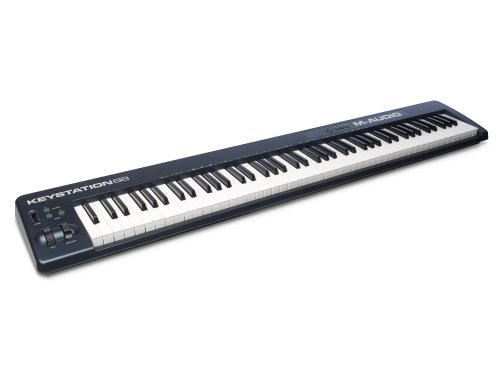 M-Audio learned its lesson with the Keystation Pro and scaled way back to create the best 88 key controllers they could. Gone are the immense amount of knobs, function buttons, faders and LCD screen. Replacing the spotty actioned fully-weighted keybed is a more responsive semi-weighted keybed.

The Keystation 88 II does step into the future with its compatibility of iOS devices, which can really only be seen as a gimmick for such a large keyboard, but with Korg’s Gadget coming for your faves, who knows, maybe M-Audio is onto something. This will be the most straightforward of the boards on this list.

Arturia’s first player centered 88 key MIDI controller hits all the marks for making the virtual reproduction-focused company a contender in the keyboard controller market for the foreseeable future.

Unlike the missteps that made M-Audio’s Keystation Pro have a messy rollout, the KeyLab 88 gives you the bells and whistles without the unnecessary added cowbell. It includes Arturia’s now signature gel drum pads, 10 endless encoder knobs and a fader bank to match. Also unlike the Keystation the KeyLab features a full hammer-action hybrid keybed for realistic playability.

One of the Big 3 of the main players of the music production companies, Roland is the only legacy company that appears in this best of for 88 key MIDI controllers. Though it may look straightforward, this has all of the realistic feel of a Roland digital piano, without the sounds. This is a piano player’s keyboard controller if there ever was one, unrivaled playability is the focus factor that Roland lead with in the making of the Roland A-88.

What makes the A-88 stand apart from its equally playable and high-end competition in the 88 key MIDI controller space are the Roland intricacies. Roland’s pitch bend and modulation leveler is one of the most accurate modulation controllers I have ever had the pleasure of using, and even with the test of time, the pitch bend is locked in because of this unique design. Adding to the modulation party is Roland’s D-Beam technology which is basically the weirdest thing to come into the synth technology for over 2 decades. 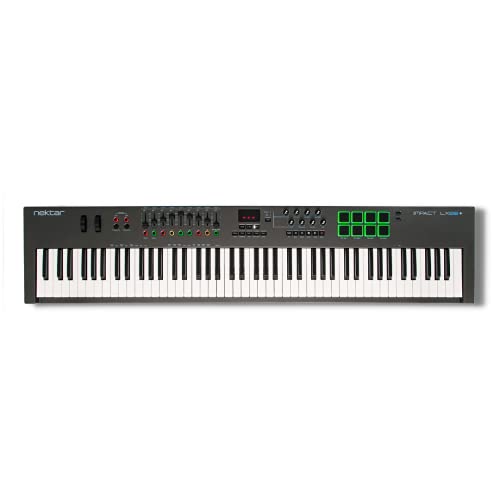 When it comes to 88 key MIDI controllers, most people want to go with a “name”. Names give us a trust based on track records and previous successes, but every now and then a no-name begins to make a name for themselves because of quality, price, and forethought. One of those companies making a name for themselves is Nektar.

Founded for the purpose of figuring out what makes a great MIDI controller, Nektar has spent the better part of 8 years figuring that out, and thus far they’ve done a great job. Everything the company does is strategically thought-out, which makes the LX88 the best 88 key controllers to buy on a budget. With a key focus on DAW and Plugin integration, the LX88 puts creation back at your fingertips rather than mouse clicks.

Native Instruments has proved to be one of the most resilient companies in the audio technology sectors. Native Instruments has long hoped to step into the world of hardware, with their first real sudo-success of their Kore line which debuted just a little over a decade ago. Though Kore line was discontinued soon after the debut of the Kore 2 system, NI’s Komplete Kontrol has the soul of the Kore at its own core.

Native Instruments is the premier plugin company by creating the platform from which all sound design houses could create custom sound libraries with their highly unparalleled Kontakt sampler, powerhouse synthesizer Massive, and the wet dream of many a sound designer for nearly two decades, Reaktor. Though these are only a few components of Native Instruments equally unparalleled sound library, the concept behind Kore was that “the whole is greater than the sum of its parts” which allowed users to make super multi-part instruments using different aspects of the Kore library, which was basically a lite version of Komplete.

Komplete Kontrol picks up where Kore 2 left off, and then blasts off on a rocket to space, and then that spaceship hit a wormhole and time-traveled to 2015 and Native Instrument’s had already achieved gargantuan success with their Maschine line. Following the footsteps of Akai and going from beat pad to keybed, the Komplete Kontrol was born and so was the software giant’s next proprietary file format, the NKS.

NI’s Komplete Kontrol S series is focused on removing the reliance on your computer to create and edit your instruments. Straight from the mind of someone who watched Tron Legacy one too many times, the Komplete Kontrol looks like is an 88 key MIDI controller like nothing else on this list. Like the Nektar it has full DAW and plugin control, but with the introduction of NKS, it takes plugin integration to the next level, and its complete integrations allows users to look at it rather than their desktop (or laptop if you’re using an 88 key MIDI controller with your laptop, who am I to judge).