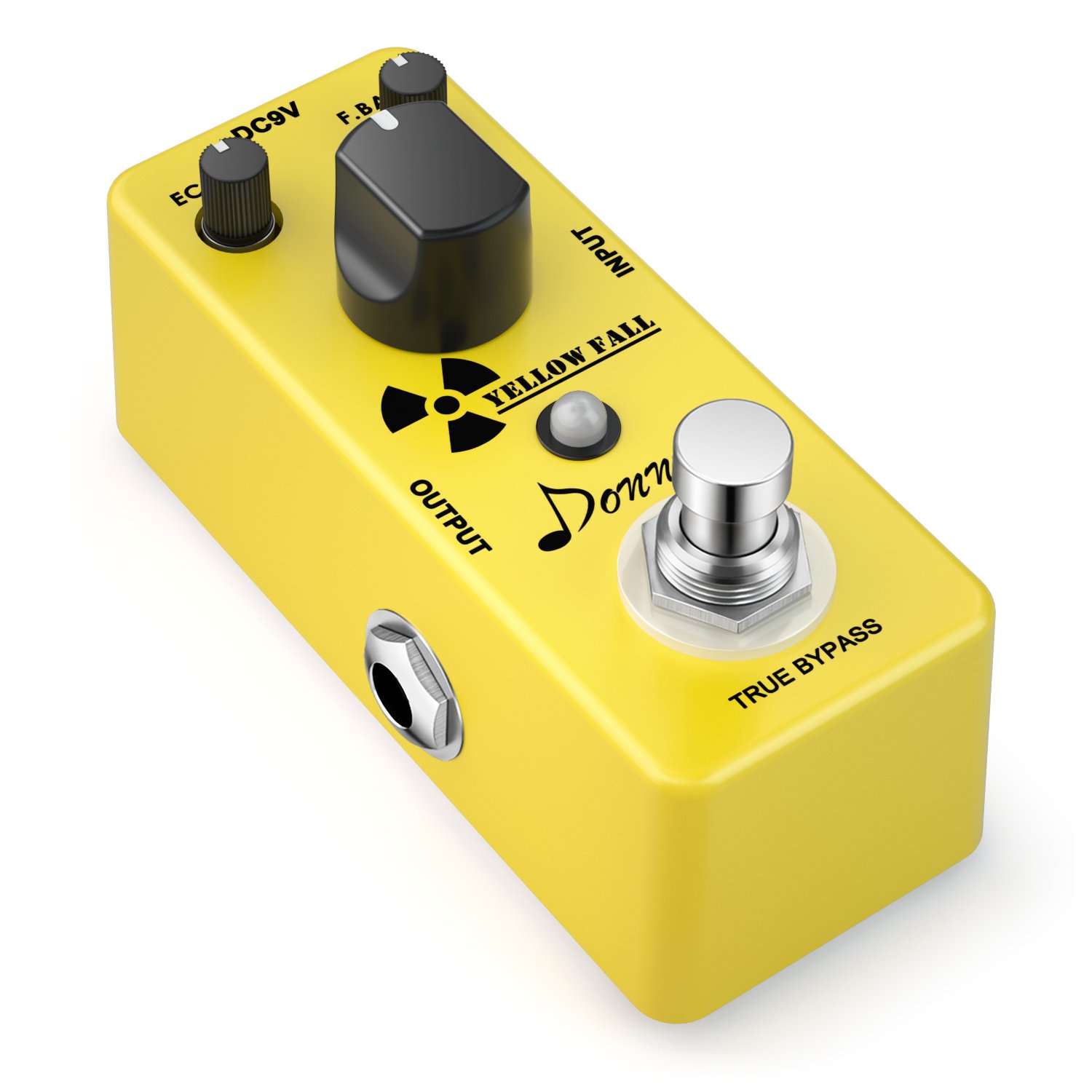 Looking for the best delay pedal? If you want something impressive yet affordable, try the Electro-Harmonix Canyon Delay and Looper Pedal. If it’s the crème dela crème you’re after and don’t mind dropping some coin, you want the No products found.. But hang on, let’s back up for a minute. Just what is a delay pedal good for, anyway?

are one of the most frequently used effects for guitarists in practically every genre of modern music. A delay pedal can be a subtle addition to bring a solo tone bursting to life, or the centerpiece of your sound by adding cascading layers of delay to your tone. Whether you are trying to add a dash of ethereal harmony ala David Gilmour, or bring a series of bouncy, repetitive delays to the forefront of the music as The Edge might, all this magic and more awaits within delay pedals.

With delay being such a varied and versatile sound effect, there is no shortage of selection when it comes to pedals. Not all delay pedals are created equally. Some are designed to create very specific type of delay and others geared towards a more general purpose approach. Some are designed to be affordable and are mass produced day in and out, while others are boutique products hand-made in small batches.

Let’s take a look at some of the different types of delay and what they can do for your sound.

Just What Is Delay, Anyway?

Put simply, a delay pedal works by taking what you play on your electric guitar (your signal) and storing it for a short amount of time (a delay) before sending it along to your amplifier or speaker. You can even have a delay which will pass that signal along multiple times, giving you a series of “repeats.”

Modern delay pedals are rich with features that enable an amazing depth of sonic exploration. You can take precise control over the length of the delay (typically a setting named Time,) the number of repeats (sometimes called Feedback or Taps,) even program the tempo of the delay. Modulation delay effects enable you to add effects like chorus, tremolo, or change the pitch of the note on successive repetitions to create entirely new sounds.

You’re probably already familiar with guitarists such as The Edge or Slash who use their delay effects to play seemingly impossible guitar lines which sound as if multiple guitars have been layered on top of each other. This is sort of “live multitracking” is accomplished with a delay pedal programmed to create a repetition of the sound after they have struck the notes on their guitar.

Delay effects are used among both rhythm and lead guitarists to add interesting rhythmic effects or a subtle “thickening” of the sound created by adding a very slight delay to a tone. These short delay times create a nice natural chorus effect which can be nearly imperceptible yet add a certain je ne sais quoi to any tone.

There are a few simple controls common to almost every delay pedal. While some delays are simpler and others more feature-rich, typically you will see at least two or three of these controls on your delay pedal:

With Analog Delay Pedals, your guitar signal is routed through a series of capacitors in order to create a physical delay in the signal. This process not only creates a delay but also colors the resulting sound with a tone determined by the peculiarities of that particular delay circuit. Because of the unique sound of certain analog delay pedals, some guitarists (and analog purists) prefer analog delay pedals.

Digital Delay Pedals use a Digital Signal Processor (DSP) to create delay based on an algorithm. While some feel that digital delays lack the warmth and unique tones of analog delays, the versatility and range of control offered by digital delay pedals far exceeds any analog options. Digital delay effects can be programmed to within milliseconds of accuracy and offer a huge array of delay algorithms which can create effects impossible on analog delay systems and even emulate the sounds offered by classic analog delay pedals.

A third type of delay, known as Tape Delay, uses magnetic tape to record and then play back the delayed signal. These pedals are rare and mostly confined to boutique or vintage examples, however some guitarists seek them out for their unique tone. 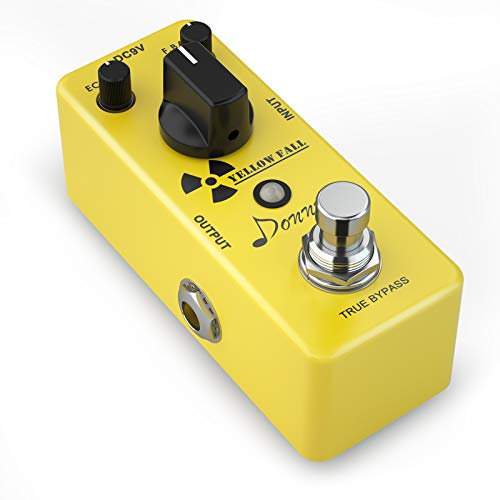 If you just want to dive into experimenting with delay pedals and have no real experience, this is a fantastic place to start. Despite being a fraction of the price of most delay pedals, this tiny yellow delay pedal has some impressive sounds.

A simple digital delay designed to mimic analog sounds, it has no frills and just three control knobs. But don’t be fooled by the simplicity. Professional or amateur, the quality of the Donner Yellow is an impressive bang for your buck.

This stylish stompbox from Electro-Harmonix is as easy on the ears as it is the eyes. Packing a versatile feature set into a compact and attractive package, the Canyon Delay is a digital delay pedal which puts a variety of different delays at your fingertips. The Canyon Delay offers ten different settings which capture a variety of classic delay tones and also offer extra goodies like a simple reverb for added shimmer and a 62-second looper you can use to multitrack live in real time!

One of the most impressive things about the Electro-Harmonix Canyon is that it maanges to do all of this while retaining an elegant simplicity. Brilliantly easy to use, with the twist of a few knobs you have a whole world of delay effects ready and waiting at your feet. Plus, it has tap tempo! 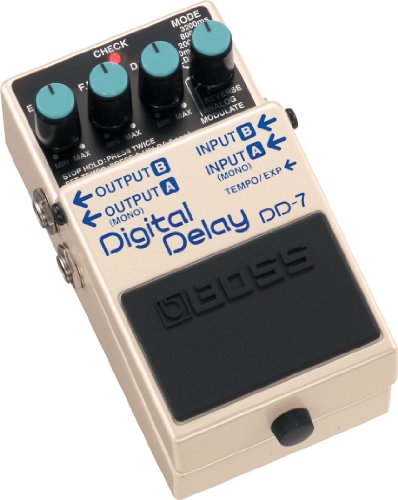 The Boss DD-7 is a workhorse pedal that can be found on the pedal boards of many gigging musicians. Offering a powerful selection of digital delay options in a rugged and familiar Boss form factor, the DD-7 offers a huge array of usable and familiar sounds. It also incorporates a “Hold” feature which allows the pedal to double as a looper for up to 40 seconds of loop, although you can’t engage the delay effect while using the looper.

With so many options packed into so few controls, getting everything you can out of the DD-7 requires a little know-how, much of which is provided in the manual. But even if you just skim the surface, you’ll have a huge range of delays to choose from. 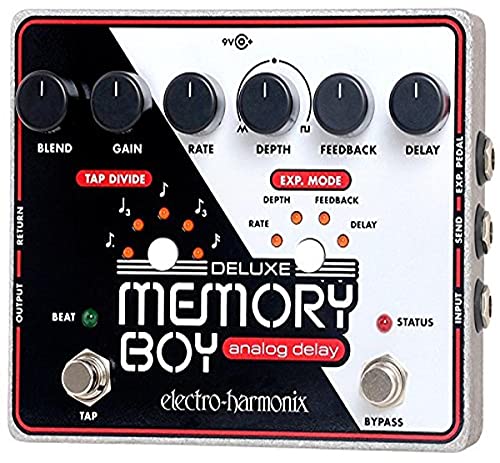 Electro-Harmonix is a well known name in guitar electronics. The Memory Boy is a spin on their classic Memory Man, using a very similar circuit in a smaller casing with a few modern additions. Aside from just straight-up delay effects, the Memory Boy can also be used to create shimmering vibrato and chorus effects with its modulation controls. 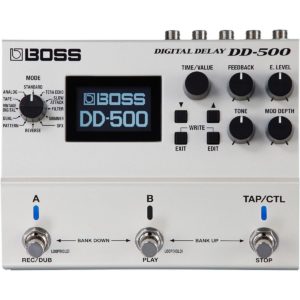 The Boss DD-500 Digital Delay pedal looks – and sounds – like something straight out of Star Wars. Taking the “digital” in digital delays to the next level, the Boss DD-500 is unlike many other pedals. Instead of having a few knobs you twist and go, the DD-500 requires a bit of programming using its built-in LCD screen. This is because you simply couldn’t capture the huge depth of features on the DD-500 with a couple of little knobs!

At the heart of the DD-500 are 12 delay modes which can be customized and tweaked and tested to create a nearly infinite palette of sounds. Program and save your favorite effects as patches to be called up whenever you’re ready to use them. Spend awhile plugging in your favorite settings, save them, and you have an entire library of mind-bending delay effects at your disposal at any time.

Just about any type of delay you’ve heard can be replicated with the DD-500, though it might take a bit of work in getting everything set up correctly! From classic slap backs to shimmering ambient modulations and everything in between, the versatile algorithms that call the DD-500 their home have a lot to offer players of all styles.

The Strymon Timeline is an incredible versatile digital delay designed for professional musicians working in the studio and live settings. With some of the highest quality digital sound processors available in a digital delay pedal, the Strymon Timeline offers 12 unique delay algorithms that allow it to create swells, shimmering modulations, stunning crystalline echoes, impressive tape delay emulations, and a seemingly endless well of other stunning effects.

One of the most distinguished delay pedals in the modern guitar arsenal, the Strymon Timeline can often be spotted on the pedal boards of world-class musicians. With a huge amount of control immediately at your fingertips, the Timeline can be programmed to remember up to 200 presets, giving you an unparalleled arsenal of amazing sounds ready to go at the press of a button.

The Timeline can be synced up to MIDI for more complex rigs, as well as offering stereo input and output. An expression pedal can also be configured to control one or multiple knobs, letting you change your delay parameters as you play!

Explore With Your Ears And Your Fingers!

The most important thing when it comes to choosing the right delay is finding something that you enjoy playing with and listening to. Hopefully we’ve given you some good options to explore, but always remember to trust your ear and you experiment liberally in your quest to find the sound you’re after.

Don’t be afraid to twist the knobs to every extreme to see what kind of sounds are really lurking in those pedals at your feet! You may just find something inspiring.