Want to jump straight to the answer? Our choice for the Best Desktop for Music Production is the Apple Mac Pro !

Modern music production is truly mind-bogglingly amazing. You can fit an entire studio worth of equipment into nothing more than the software on a home computer. You can create an entire album just about anywhere, from your basement to your bedroom to a shed in the woods. But the one thing you’re going to need to do all of this is some real computing power.

Running your Digital Audio Workstation (DAW) and all of its plugins, virtual instruments, imported clips and samples, interfacing with audio peripherals, and everything else that comes with music production can put quite a strain on your computer’s processor and memory.

From creating musical scores in movies to orchestrating sound systems for live events to designing beats for songs, audio engineers focus on the science behind the art of music, many of which attend the best audio engineering schools. Possible career pathways include a recording engineer, sound designer, creating video game audio content, television show scoring, location recording, live sound reinforcement, and audio system maintenance. Choosing the right music degree can help you determine where you want to take your music career and what school to choose.

The iMac is one of the most popular among music producers. It offers a sleek and powerful setup, and built to maximize space.

The miniaturization of computer technology has allowed producers to make music on portable devices like laptops and even smartphones (in a limited capacity,) but the king of music production still remains the desktop computer. Let’s take a look at just what goes into a quality desktop for music production. 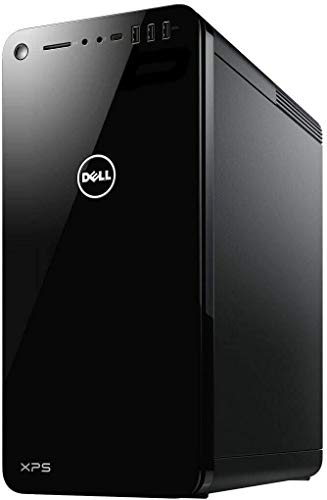 This Dell XPS is a pretty unassuming looking tower. But all you need to do is fire it up to be impressed with its performance. Packing more than enough power to handle even the most intense home music producer’s demands, this Dell does it all for an impressively low price.

You get an Intel Core i7 processor featuring six cores that clock up to 4.6Ghz, backed up with 16GB of RAM and a massive 2 Terabyte hard drive for storage. As something of a bonus, you also get a powerful 4GB Nvidia GeForce 1050Ti, which means you have plenty of processing power on standby for when you’re ready to switch gears to video editing or unwind with a gaming session.

This is an excellent option if you just want a classic desktop tower you can pull straight out of the box and put to work producing your latest track. It’s reliably built, easily serviced, and has the hardware to tackle most production projects. Plus, it won’t break the bank. 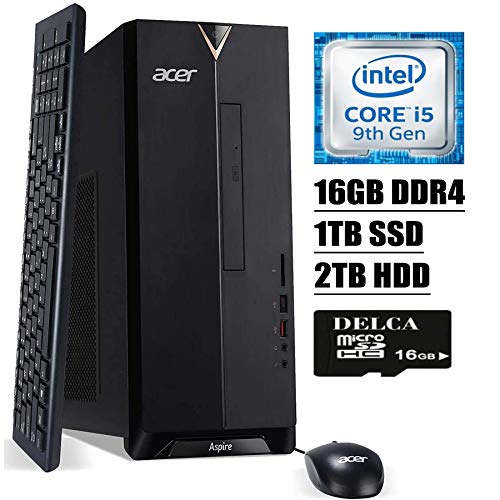 If you’re on a serious budget but still want a computer that can muscle its way through some music production, this Acer Aspire desktop will get the job done. It’s got an Intel Core i7 processor that clocks up to 4.2Ghz with four cores. 16GB of RAM and a 2TB HDD provide memory and storage.

This Aspire lacks a graphics card, instead of relying on the motherboard’s integrated Intel HD Graphics 630 chip. This helps keep the Aspire’s price tag in the budget range and is enough for most music production efforts. However, it makes this Acer a little less versatile than some slightly-more-expensive machines.

All in all, this is a decent way to get yourself a desktop that will handle the demands of music production without choking. 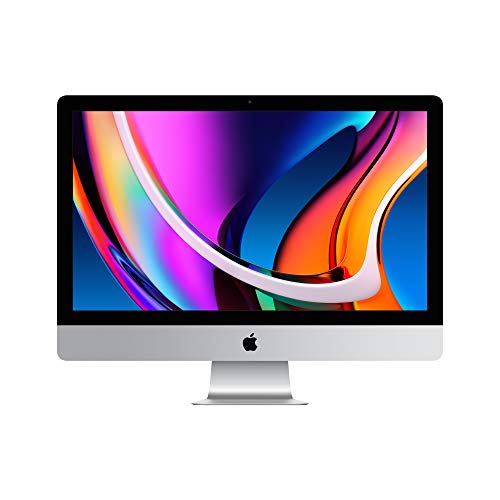 If macOS is your weapon of choice, you’ll definitely be purchasing an Apple desktop. And the Cadillac of Apple desktops has to be their sleek, huge, all in one iMac desktop. This all in one system integrates the entire desktop “tower” in the screen unit, a 27” 5K display with Apple’s Retina technology. These screens are quite something to behold, offering plenty of screen real estate and a gorgeous platform to produce on. Behind that screen, the iMac offers an Intel Core i5 quad-core processor that clocks up to 3.8GHz, 8GB of RAM, and a 2TB hard drive.

Whenever you go with Apple, you are paying something of a premium for their operating system and design. Though true that you could find a desktop with better specs at a cheaper price, the iMac has a certain appeal that most mass-produced desktops lack. Not to mention, if you’re hoping to use macOS, the options for Apple desktops are rather limited, with the iMac certainly being a front runner.

One drawback music producers might find is the iMac’s limited number of ports for adding peripherals, however, this can be corrected with accessories.

4. HP Envy All In One Computer 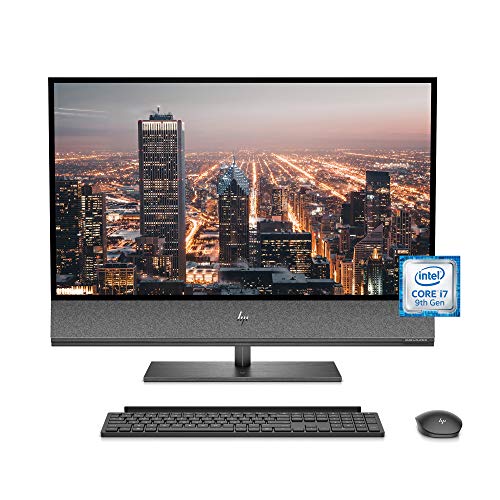 If you like the all in one design of the iMac we looked at above but aren’t so fond of its price tag — or if you prefer Windows — this HP Envy might just be the machine for you. The centerpiece of the Envy is the utterly massive 32” screen. The generous screen size offers plenty of space for running your favorite DAW, where screen space is always at a premium. Perfect for getting lost in the music!

Like the iMac, the Envy is an all in one design, with all of the hardware in the back of the screen. Inside it, the Envy is running a quad-core Intel i7-9700 that clocks up to 2.40Ghz, 32GB of RAM, a 1 TB solid-state drive, and NVIDIA GeForce RTX 2060 graphics.

While you could find better specs for the same or lesser price in a desktop tower, when you factor in the inclusion of the huge 32” screen, this is not a bad deal.

Get the HP Envy on Amazon 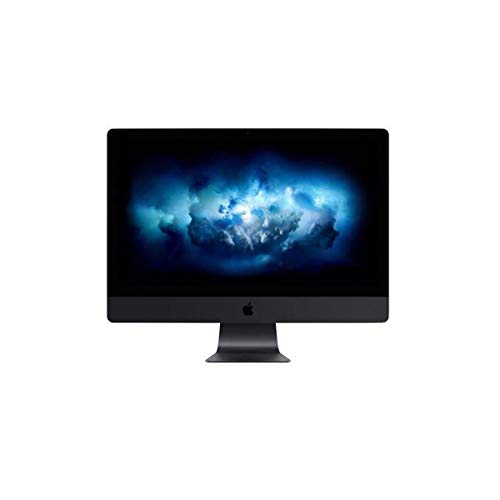 The Apple iMac Pro is a significant leap upward in terms of performance in comparison to the standard iMac.

With the upgrade to an iMac Pro, you’re going to get more storage with 1TB SSD, and then incremental improvements with graphics, processing power, and improved graphics.

The most striking aspect is the style of this machine, with the space grey sleek feel and the matching keyboard and mouse, it truly looks professional.

If part of your music production involved editing work or video production as well then the iMac Pro may warrant more consideration. With up to 18 cores available in an iMac, you can make every pixel count without compromise. 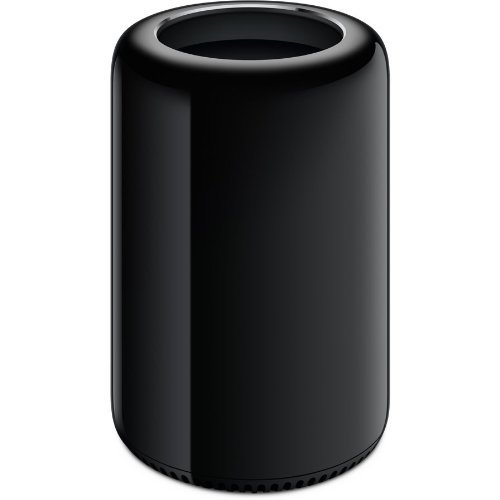 If you’re after macOS on a desktop but not interested in the all in one style of the iMac, the Mac Pro is your best bet. The Mac Pro does away with the huge fancy display of the iMac, instead of focusing entirely on putting some serious hardware into an incredibly unique and eye-catching form factor. Truly a desktop tower like no other, the sleek black curves of the Mac Pro are sure to raise a few eyebrows.

Inside this space-aged looking device we find a 6-core Intel Xeon processor with clock speeds up to 3.5GHz, 16GB of RAM, and an ultra-fast 256GB Flash memory solid-state drive. You also get a set of AMD FirePro D700 graphics cards, each loaded with 3GB of VRAM.

As we pointed out before with the iMac, it is definitely possible to get the same or better specs for the same or better price if you opt for a Windows PC. But for those committed to sticking with macOS, this is a serious machine that can tackle just about anything you want to throw at it.

Get the Mac Pro on Amazon

What Your Desktop Needs To Handle Music Production

Computers can get a little confusing once you get under the hood. Even on the surface, there are a lot of features that you might be wondering if you need or not. But when it comes to technical specifications, many find themselves lost completely. Not to worry. There are three primary things you need to look out for when it comes to selecting hardware for your music production desktop.

Choose Your DAW and Operating System BEFORE You Buy!

Desktop vs. Laptop For Music Production

Laptops are popular among producers for their ability to work on the go and their utility as an integral part of some live performances. This latter aspect is key. If you need to utilize your computer as part of your live performance act, you’ll definitely want to look into laptops.

However, if portability is a non-issue, there are many benefits to getting a nice desktop. The first and foremost is the price. Dollar for dollar, you will get much more capable hardware when you purchase a desktop over a laptop. The second thing you get with a desktop is power. Unlike laptops where everything has to be miniaturized to fit into a portable form factor, the desktop can be as beefy as it needs to be. You’re limited only by the latest and greatest technology available on the consumer market. You can get far more power out of a top of the line desktop than any comparable laptop. Finally, you have repairability. Laptops can be tricky to fix, often requiring specialized parts or repairs that can only be performed by repair shops or the manufacturer.

Consider Assembling Your Own Desktop

While it might not be for everyone, you can save as much as several hundred dollars on your desktop purchase by assembling the parts yourself. This does require a little bit of effort and know-how, but it’s nothing you can’t figure out how to do with an afternoon searching the web and watching videos on YouTube.

Modern desktop computers can be surprisingly easy to put together, consisting of little more than a few wires, screws, and parts which snap together like Legos. Perhaps a little trickier than the assembly is picking the right parts. You’ll need to cross-check everything for compatibility, but there are some tools online which can help you with this. However, the ability to pick every part yourself is an excellent opportunity to save even more money and create a completely custom computer suited to your needs.

While the full details of assembling your own desktop are well outside the scope of this article, it is a great way to save hundreds of dollars, get an excellent music production desktop, and learn a thing or two about computers along the way.

Find A Desktop Which Unlocks Your Creativity

With the right hardware, software, and a bit of production know-how, you can make professional-quality records from the comfort of your home. Don’t skimp on your music production desktop’s hardware! It might not be as exciting or flashy as a new instrument, but it could go much further in the quality of music you create than something you get to show off on stage.

Always remember: get the best processor (CPU) your budget will allow. Your processor is the most vital part of hardware when it comes to music production. The second most important factor is the RAM. If nothing else, optimize your music production desktop to maximize processor speed and RAM.

With that in mind, happy hunting!

How Much Does it Cost to Build a Professional Recording Studio?