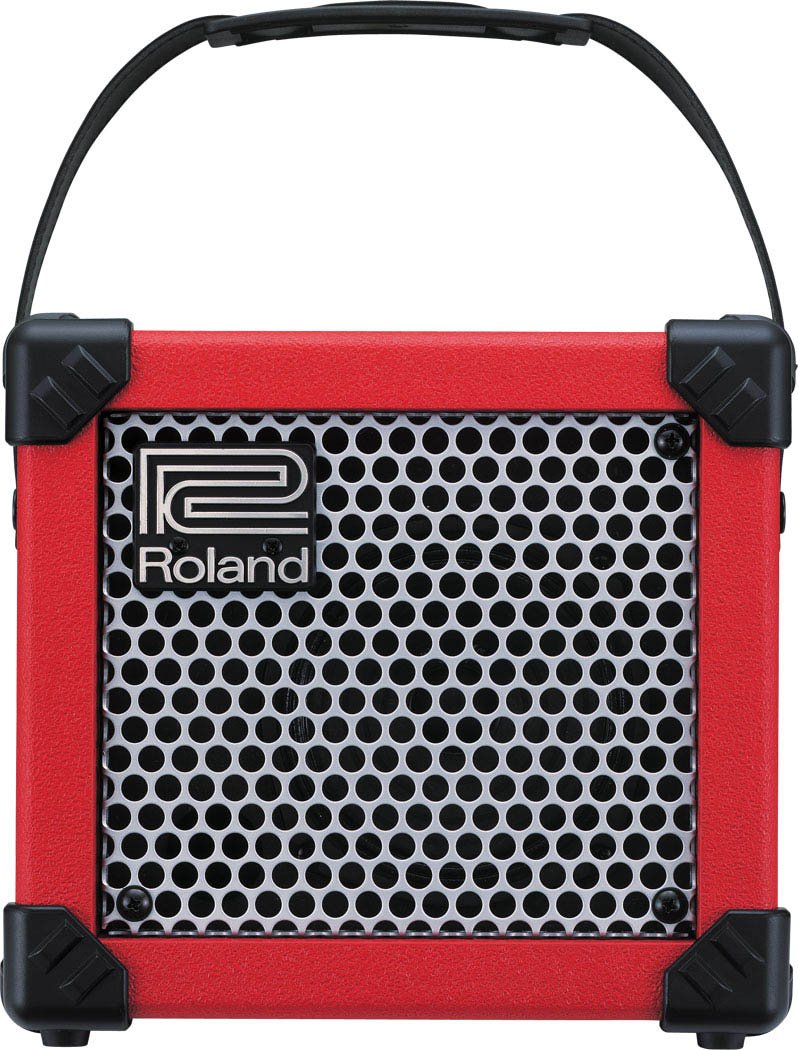 Choosing a guitar amplifier can be a big decision. It’s not only an investment, it’s also something that has the potential to define your guitar tone for months or years to come.

Whether you’re a complete beginner or a seasoned guitar slinger, your amplifier is a huge part of your playing.

Not only is it one of the most defining elements of your tone, it massively affects how your guitar responds to your playing.

Someone hoping to immerse themselves in the distorted rumble of heavy metal isn’t going to be very satisfied with a simple clean amp with sparkly highs and warm mids.

Meanwhile, a more country oriented player might find themselves in love with that sparkly amp.

Although effects pedals such as distortion can help bridge this gap, there is no substitute for having the right amp.

Below, we’ll give a brief overview of what to look for in an amplifier. After that, we’ll give a few suggestions for some of the best guitar amps that won’t let you down.

A guitar amplifier works by taking the signal from your electric guitar’s pickups and amplifying it to a level that can drive a speaker and produce sound.

For guitarists, there are three major things inherent to every guitar amp:

The Three Kings of Amplification

As we mentioned above, guitar amplifiers rely on one of three methods of amplifying a signal. Each has its own benefits and drawbacks. And although you can play any style of music through any amplifier, each has come to be associated with particular genres and artists.

First, we have Tube Amplifiers. These are venerated among guitarists for their warm tone and association with early guitar super stars like Jimi Hendrix.

In many ways, tube amps are considered the “original” guitar amp, and with good reason.  They sound beautiful and are sought after to this day.

However, they tend to be heavy, expensive, and comparatively fragile. The “tubes” in these amps are an almost-antiquated technology known as vacuum tubes.

Made from glass and prone to burning out, shattering, or coming lose from their seating, tube amps are notorious for being high maintenance and the cost of tubes is not getting any cheaper.

In contrast to this, we have Solid State Amplifiers. These were designed in many ways to avoid the troubles of finnicky tube amps and rely purely on circuitry – no vacuum tubes – to produce their amplification.

Some guitarists give solid state amps a bad rap. They point to the lush harmonics and natural compression that tube amps offer. In many ways, it is true that this sound has come to define the electric guitar and is what many user’s are seeking.

However, solid state amplifiers have attracted some very notable names spanning a variety of genres. Dimebag Darrel, Allan Holdsworth, even Eddie Van Halen, who opted to use a solid state amp on his legendary “Beat It” solo.

Solid state amps have come a long way. They do a great job at eliminating the fragility of tube amps and can be quite versatile when dialed in properly.

Yet, the indisputable king of versatility in amplification is Digital Amplifiers. These use computer processing to create digital “models” of classic and modern guitar amplifiers.

Often referred to as “Modeling Amplifiers,” these digital units can contain models of dozens or even hundreds of amplifiers to be accessed at the press of a button along with effects, EQ, and countless options a tube or solid state amp could never hope to offer.

Though at first many musicians turned their noses up at these digital innovations, today there are few players who would reject a state of the art modeling amplifier.

If you want a completely no-nonsense practice amp at an unbeatable price, this is your amp.

This amp costs less than $100 and runs on just 3 watts of power. Despite that, it offers an exceptional tone that is sure to inspire many practice sessions.

The FLY3 has only 5 controls: Gain, Volume, EQ, Delay, and Delay Time. It also features a Clean and Drive channel you can switch between. This makes dialing in the FLY3 a breeze. It sounds pretty good just about whichever way you twist the knobs.

You can run the FLY3 on batteries and you can easily plug it in to your MP3 player to jam along with backing tracks or your favorite songs.

The perfect little practice amp. Does everything it needs to and nothing it doesn’t.

Probably one of the best starter guitar amps around, the Roland Microcube is a tiny digital amp jam-packed with all sorts of nifty features.

It offers eight different amplifier models ranging from the bright and sparkly JC Clean up to the heavy chugging Extreme. This makes it great for practicing just about any sort of music.

You can do some further tone sculpting with the eight included effects. You can select either tremolo, chorus, phase, flanger, or octave, and combine it with reverb or delay.

While it’s not something that would cut it at a gig, the Roland Microcube is a perfect practice amp for guitarists at any level. For the new player, it’s a great introduction to playing with effects and experimenting with different tones.

The built-in speaker is small, but produced some decent volume and a nice tone. The Microcube also incorporates a tuner and includes a 3.5 mm jack which allows you to play backing tracks through the speaker as you perform or practice. Plus, it has the option to run on AA batteries! 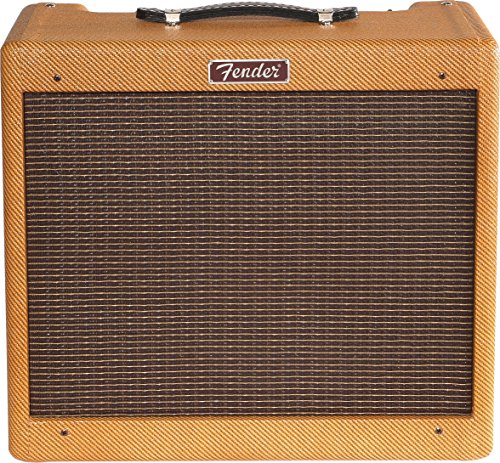 It also has an impressive tone and very manageable volume. While you could keep up with a band on stage, you can also dial it down for practice in a small room without hurting your ears.

All in all, this is a great place to get started with a tube amps. It’s a nice introduction to the warm tone and raw power of having tubes at your disposal, without getting too terribly expensive. The Jensen P12N 12” speaker can move some serious air, or it can just give a gentle flutter for practice during quiet hours. 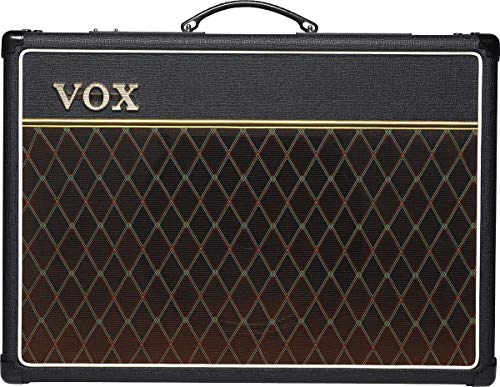 The Vox AC series is legendary in electric guitar music of all varities. The AC30 has made its way from rock legend Brian May of Queen all the way down to super modern progressive shred wizards like CHON.

The AC15 isn’t quite as revered, but it offers an exceptional jumping off point for anyone with a love for those classic Vox tones.

Massively versatile, the AC15 does well for itself with a beautiful breakup when the Volume is pushed up. It also responds excitingly well to all sorts of effects pedals, from tube screamers to fuzz faces and heavy metal overdrives.

The AC15 is a tube amp which makes use of EL84 power tubes as 12AX7 preamp tubes. It features a 10” VX10 speaker made by Celestion specially for use in Vox amplifiers.

The controls are very simple on the AC15, which means there isn’t a lot of ways to go wrong. It includes Bass and Treble knobs as the Tonestack, along with a Tone Cut knob. It features a built in tremolo and a real spring reverb which offers some truly lush tones.

A winning choice of amplifier for practice or gigging.

No name in guitar amplification is more iconic than Marshall.

From Jimi Hendrix to Steve Vai and seemingly everyone in between, Marshall amps have been an unavoidable part of rock music. Of heavy metal music. Even working their way into genres no-one would expect with Marshall tones liberally dispersed across pop, funk, and jazz music.

While the defining image of a Marshall is the massive stack dominating the stage, you can also get that Marshall tone without having to worry about owning a refrigerator-sized amp.

The DSL 40C is just that. It’s still a beefy combo amp packing a 12” Celestion speaker and 40-watts of tube amplifying power, but it doesn’t take up too much space and won’t deafen you if you turn it on in a small room.

It includes a footswitch for easy switching between the clean and drive channels. You also get a built in digital delay and reverb. Other than that, it’s just straight ahead Marshall tone. 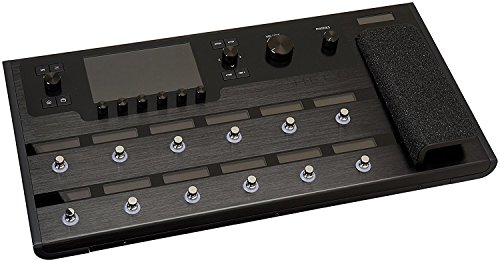 If you’re ready to enter the realm of digital guitar effects, the Line 6 Helix is a pretty incredible place to start.

The Helix includes dozens of guitar amplifier models. That means that, at a press of a button, you can switch between a sweet and subtle Fender to a booming Marshall or a rocking Mesa Boogie.

You can also apply just about any effect you’ve ever wanted in a signal chain you have complete control over. Add some flange, reverb, and experiment with different distortion pedals to dial in your tone. Or go completely out of this world with multiple cascading delay effects and other mind bending effects.

Because the Helix is just a processing unit, you’ll need a powered speaker or a guitar cabinet in order to actually hear the sounds it offers.

For the gigging musician, this little pedalboard can save you the hassle of lugging around literally hundreds of pounds of gear!

Even if you’re just a bedroom guitarist, having something like this in your arsenal is an almost bottomless well of inspiration. Now you can have every guitar tone you’ve ever wanted waiting to be dialed in.

Finding the right amp means forming a personal relationship with the sound it produces. You want to find something that responds in the way you expect, reliably, and has the potential to get all of the sounds you want and need from it.

Don’t be afraid to twist all the knobs, plug in every pedal you can find, and experiment with different guitars to really put every amp to the test. You might be surprised in what you find in an amp you’d never expected to like.

While it’s a great starting point to look into what your guitar idols have put to use on stage and in the studio, always be willing to step outside of your comfort zone!

Every amp has a unique characteristic to it and there is surely one out there waiting to serve the needs of your playing.