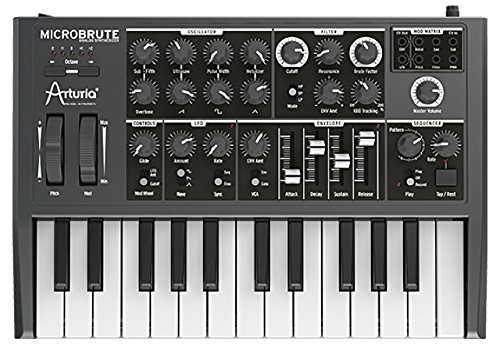 No instrument offers as much control over its sonic profile as the synthesizer. Abandoning the constraints of acoustic instruments and their troublesome ties to real world physics, synthesizers create sound through entirely electronic means. Experimentation with electronic instruments and their “synthetic” sounds dates back to the late 1800s. Despite these early origins, it would take until the sixties for the synthesizer to truly earn itself a place in modern music. Even though the sixties and seventies brought us plenty of unforgettable synthesizer music, the story of the synth had just begun.

Throughout the eighties and nineties, the introduction of the digital synthesizer truly revolutionized music and music production. Digital technology threw the doors wide open to create synthesizers equipped with a virtually endless array of possibilities for creating sounds of all descriptions and more than a few which defy description completely.

Synthesizer Crash Course: What You Need To Know Before Purchasing

If you’re in the market for a synthesizer, it won’t be long before you come across a whole lexicon of terms. Synthesizers are pretty complicated. There is no way around that. The massive amount of control they give musicians over the sounds they create necessitates them being feature-rich and full of different parameters.

Despite this complexity, many synthesizers aren’t that difficult to actually put to work. Especially the models which come pre-loaded with lots of great sounds and don’t require much setup or tweaking. Regardless of how deep you plan to get into tweaking the many parameters on your synthesizer, it’s good to have a general understanding of how the whole thing works, what features a model has, and ultimately what you are capable of doing with it.

In classic synthesizers, sound is produced through three basic steps. First, an oscillator creates a waveform. The waveform is then fed into what is called a filter. Filters are used to either cut or boost certain frequencies. The signal is then passed through any effects such as modulation, delay, or distortion, before being amplified and output to a speaker or recording device. By manipulating all of these parameters, a synthesizer player has the ability to create classic synth tones as well as unique sounds all their own.

Originally, synths made their magic using entirely analog technology. Good old circuits. In the 80s, the introduction of digital synthesizers shook things up dramatically. Digital technology allowed this new generation of synthesizers to be produced much more affordably than their older analog counterparts. It also brought with it a whole host of new features, such as sampling, the ability to record a sound and then trigger and manipulate it through a synthesizer. This allowed synthesizer players to realistically recreate other instruments, play real world sounds, and delve into a bottomless rabbit hole of musical possibility.

The introduction of sequencers allowed synth players to program musical passages which could be played back and manipulated in real time. Improvements in computer memory saw the introduction of keyboard “workstations” decked out with sequencers, the ability to record samples, and pre-loaded with samples from a huge variety of instruments. Further advances continued to improve synthesizer technology, bringing us advanced polyphony (the ability to play multiple notes simultaneously,) and multitimbrality, the ability for a single synthesizer to play multiple different sounds from different samples and instruments simultaneously.

What To Look For In A Synthesizer

For many, price concerns outweigh the technical comparisons. Analog synthesizers aren’t cheap at all, but digital models can be very cheap. Lower-end analog synthesizers can be very limiting. They are usually monophonic, meaning they are not polyphonic and therefore can only produce a single note at a time. This completely bars them from playing chords or harmonizing as a piano player might, relegating them to playing single note melody lines. This is because analog synthesizers require a whole new set of circuits for every tone they wish to produce simultaneously. In contrast, a digital synthesizer can easily handle polyphony, producing as many notes as its processing power can handle.

The best analog synths are capable of polyphony and come with all sorts of nifty features for creating incredible sounds, but you can expect to pay thousands for them. They are exceptional devices, but their extreme cost consigns them to professionals and diehard hobbyists. In contrast, digital synthesizers can provide a reasonable facsimile of everything an analog synthesizer can do, plus all of the incredible possibilities of sampling, sequencing, the ability to save preset sounds, and options for easily hooking into MIDI or USB to interact with the rest of the digital world. And it can do all of this at a fraction of the cost.

Throughout the 2000s and 2010s, a resurgence in synthesizer technology began to bring us affordable “hybrid” synthesizers. Combining both digital and analog technologies, these synthesizers manage to cut into the price of pure analog designs while also bringing some of the features of the digital world along with them. Let’s take a look at a few specific models.

This MicroKorg is an analog modeling synth. Don’t be confused by the term. It’s not actually running on analog circuits. Rather, it uses digital technology to create a model of that analog circuitry to produce very similar sounds. Unlike a sample-based synthesizer, the MIcroKorg emulates classic synth technology in its software. While you don’t get a sampler, you do get a few nifty gifts from the digital realm, like the ability to save up to 128 presets.

For playability the MicroKorg features 37 velocity sensitive mini-keys and 6-voice polyphony. You also get some built-in effects including delay, chorus, flanger, and phaser, along with a 2-band equalizer. The included vocoder is pretty fun to play around with, allowing you to blend your voice into the crazy synth sounds you cook up from this little Korg. A very affordable way to introduce yourself to the world of musical synthesis! 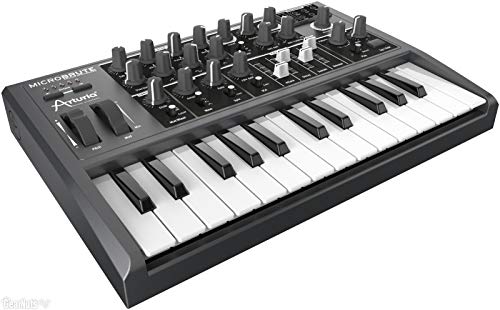 If you want to get your hands on a true, 100% analog synth at an affordable price, the Microbrute from Arturia is a great way to do so. A pure analog synth with a single oscillator, the Microbrute is entirely monophonic, meaning you’ll only get to play one note at a time. But what a note it can be! Packed with the ability to dial in classic synth tones or tweak the knobs until you find something entirely your own, there are some beautiful sounds to be had from the Microbrute.

Equipped with 25-mini keys and a versatile yet concise selection of knobs to control the analog circuits, the Microbrute is a pretty small device capable of outputting some truly larger than life sounds. The ability to generate different styles of waveform simultaneously allows the Microbrute to create some truly mind-bending sounds. You can also dial in its generous 64-step sequencer to create entire passages.

If you like the look and sounds of classic 70s synthesizers but aren’t so fond of the price of the real thing, the Korg MS-20 is a perfect way to get some of that classic flair without breaking the bank. A recreation of Korg’s classic monophonic MS-20 synth, one the most popular synths of the 70s and 80s, this modern version remains true to the circuitry and design of the original Korg MS-20. The only thing that has changed is the addition of MIDI compatibility, a huge improvement in versatility which does not alter the feel or sound of the original synthesizer.

Equipped with 37 mini-keys, a whole host of knobs, an a charming old-school patching system that lets you route your own wires through the circuitry on the face of the board, the MS-20 Mini has a lot of old school appeal. As fun as it is to play with the wires, you’ll have even more fun once you hear the sounds. Filled with deep synth bass tones, wild leads, crazy sound effects, drum sounds, and tons of other possibilities, this is an excellent way to get access to a classic monophonic synth at a great price.

If you’re a fan of the synthesizer, you’ve surely heard the name Moog more than once. Venerated among synthesizer players as one of the most sought after and emulated synth brands ever created, Moog instruments have made their stamp on countless recordings over the years. With the Sub Phatty, Moog is offering musicians a relatively affordable means of capturing that classic, inimitable Moog sound.

A completely analog monophonic synthesizer decked out with a full-sized 25-key semi-weighted keyboard, this little Moog has an incredible sonic palette. It’s also quite easy to work with the intuitive knob layout. The Sub Phatty has the ability to save four banks each with four presets, giving you a total of sixteen preset sounds you can configure and save onto the unit.

With all of the knobs laid out intuitively, it’s easy to tweak the two built-in oscillators, dial in your filters, perfect the envelopes, and mix your output all without breaking your focus on the music. Since it’s monophonic, the Sub Phatty is all about playing bass or lead lines. As its name implies, it does very well for itself in the lower range, laying down thick synth bass lines dripping with all of that Moog mojo. 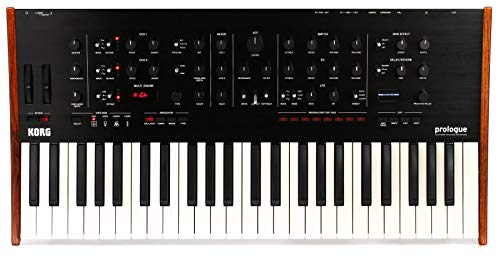 This Korg is an example of a hybrid synthesizer which makes use of both analog and digital technology to create its sounds. Because it relies primarily on analog circuitry to create its synth tones, the Korg Prologue is often talked about as an analog synthesizer. Incorporating three different sound engines, there is a lot going on under the hood of the Prologue and it is definitely not purely analog. Regardless, it offers an eight-voice polyphony that would cost many times the price tag of the Prologue in a purely analog synth. Embracing this hybrid technology allows the Prologue to break ground into sonic territories most analog synths could never dream of, pumping out lush chords in dense voicings.

Forty-nine full sized, velocity sensitive keys make up the Prologue keyboard. A series of knobs controls the synths filters and oscillators, which while not as robust as one might find on a purely analog synth still provide quite a bit of control. You also get a bunch of built-in digital effects such as delay, reverb, and modulations like flangers and phasers. For anyone looking to throw off the constraints of their monophonic synthesizers, the Korg Prologue is a great way to get some of that gorgeous analog polyphonic sound without having to take out a loan to do it!

See What You Can Synthesize

The sky truly is the limit when it comes to modern synthesizer technology. Whether you’re gunning for analog purism and want nothing more than to sit turning the little knobs that control your oscillators, or you have dreams of integrating wild synth sounds with the infinite possibilities of samples and sequencers, the synth has the ability to open up new domains of music which no conventional instrument could ever hope to unlock.

Find the synthesizer that inspires you to create and you can be rewarded for years to come. Remember, the synthesizer is the product of great experimentation! It’s all about messing about with what you have. Never be afraid to turn those knobs.