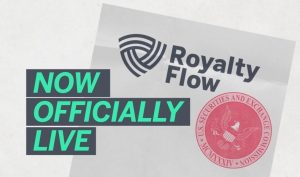 This story has been all over the media, in one sentence: Eminem’s 1999-2013 complete catalog will be available to any investor starting early December through Royalty Flow.

Royalty Flow, a subsidiary of Royalty Exchange, has purchased the 1999-2013 catalog. Through the A+ JOBS act instituted by president Obama, this unique opportunity allows investors who would not ordinarily have access to participate in a companies IPO.

When you purchase stock with Royalty Flow investors have a minimum investment of 2,250 for 300 shares of stock. An investor will earn on any usage the catalog. Since this is a new concept payouts and market fluctuations are unknown. For example a 10 year old song can be played on a popular network television show after having to years of no play time in years earning the owner or owners a residual per use. The ever growing streaming networks will also come into play on the catalogs residuals.

The release date of the IPO varies by state and is capped with a total investment of 50 million dollars. If you are seriously considering investing sign up for a free account and updates on www.royaltyexchange.com. Royalty Flow stock will be traded on NASDAQ after the initial 50 million dollars is sold.

Early December, 2017 Royalty Flow will release the initial offerings depending on the state you reside in.

Investing in music has become an interesting way to diversify your portfolio. The music industry is on the rise and has been considered a bull market for the past decade. Typically purchasing royalties for best selling artists has been reserved for an elite group of investors who have been able to purchase a catalog outright. This open market concept allows anyone to own a portion of a catalog which includes The Eminem Show and the Marshall Mathers LP. Royalty Flow plans to obtain more major artists catalogs but have not released any specifics at this time.

This is the first time in US history where a collection of songs will be publicly traded and owned.

Although names have not been released, Royalty Flow’s board consists of a lawyer who has managed mainstream artists since the late 80’s. This lawyer was a Sound Exchange original partner which is a non-profit organization that collects and distributes royalties on behalf of artists. Another board member has over 20 year experience in public accounting and the last is an expert on securitizations.

Reports tell that when representatives from Interscope Records, Eminem’s record label announced that they had no prior information on the catalogs release nor were they consulted by Royalty Flow.

We look forward to this innovation in the music industry although it may ruffle some feathers for larger names in the business. My take is it could potentially allow smaller artists to gain compensation for their work. Because this is such a new concept only time will tell on the benefits to the investors and the artists.

Financial Resources for Musicians During The Coronavirus Outbreak