It’s the clash of the titans, PRS vs Gibson in our latest guitar shootout. Who will be crowned the beast of all guitars? Gibson and PRS are two popular guitar manufacturers. Gibson was founded in 1902 in Michigan, USA. PRS was founded in 1985 by Paul Reed Smith in Maryland.

Gibson has made many iconic guitar models, from the Les Paul to the SG Special. Originally they built archtop acoustic guitars, before the days of amplification. Gibson were, and are still, one of the biggest names in guitar. They were around when only a hand full of guitar factories existed.

Both brands make brilliant guitars, which have appeared on our best electric guitar list.

The Gibson tone is usually warmer and thicker than a PRS. Although the brighter, more piercing tones of a PRS guitar will be favored by some players. Gibsons are known to be the favorite guitar of many famous players.

Alternatively, check out our Stratocaster shootout Affinity vs Bullet.

Differences Among PRS Guitars and Gibson

Let’s break down the differences between the key features of PRS vs Gibson.

For the most part, we are looking at a Gibson Standard Les Paul. There are loads of Gibson Brands ranges, from the ‘50s, ‘60s, to the modern, classic, studio, custom shop, and junior models. They are all great guitars.

One of the main differences is that both guitar manufacturers offer different body shapes.

Most PRS guitars revolve around their signature curvy shape.

The PRS SE Custom 22 is their most popular model, which features a Double Cutaway body. Most use double cutaways, although there are some single-cutaway PRS singlecut guitars though. The PRS singlecut model cutaways are deep enough to allow upper fret access.

Gibson produces a much wider array of guitar shapes and designs.
Gibson’s most popular model, the Les Paul, features a Single Cutaway body with a sharp cutaway horn. The Gibson SG is one of the most popular and iconic double-cutaway guitars.

There are tonnes of Gibson shapes, from offset to symmetrical. Gibson started making archtop Hollowbody acoustic guitars, which have inspired the designs of their contemporary models.

PRS tend to favor deeper beveling around the edges of the body.

PRS Models tend to use a set neck, which has a subjectively different tone.

Gibson also uses a set neck, although many of their guitars use bolt-on necks too.

It’s a subtle difference, but set necks are supposed to have better resonance and decay, as the energy transfers more efficiently from the neck to the body.
Bolt-on necks are an easier, cheaper method of production. These are supposed to be more susceptible to tuning issues. However, in high-quality guitars the difference is negligible.

All PRS models weigh around 8.5 pounds as a standard. This is light for a guitar, which reduces fatigue.

Gibson guitars vary in weight from model to model.

The Gibson SG model is lighter, at around 6 pounds.

Both manufacturers have very high-quality control which ensures they sound good.

Standard models feel well designed and refined. You can see, hear, and feel the high level of attention to detail in their production process. Which is exactly what you’d expect from such great brands.

Some Gibson models are of better quality than PRS instruments. Although some Gibsons are not as well made, and rank lower in quality. It depends on the range.

Related: Read our post on Parts of an Electric Guitar for more information.

Both manufacturers have different preferences in their neck and fretboard designs.

These differences are quite noticeable and create a large difference in the playing feel.

Gibsons are around ¼” shorter than PRS Guitars, this is only a small difference, but has some impact on feel.

Gibson Les Paul models have 22 frets. Depending on the range, the Les Paul uses either Medium Jumbo or Tall fret sizes.

The Custom 24 fretboard may be too compact for some players.

PRS and Gibsons use different neck shape designs. From our experience, most Gibson models have nicer feeling necks than a PRS, but not all versions.

Both guitars have well-designed nuts with no issue or looseness in the nut slots.

PRS Guitars feature the iconic bird design as fretboard inlays. These are usually abalone or mother of pearl, sometimes a synthetic material is used.

The PRS SE pickups are open-sounding humbuckers with a fantastic clean tone.

They do distort well but have a thinner sound than Gibsons. Some PRS variations opt for active pickups, which are battery-powered but produce a louder, higher gain signal.

Gibson also tends to use humbucker pickups, usually using 2 per guitar. Some Gibson models include 3 pickups.

The exact pickups vary from model to model, but Gibson makes most of their pickups themselves.

Gibson pickups have a rich, warm sound that responds brilliantly to distortion and overdrive. These are designed to be used with high output amplifiers like a Marshall Stack. They also pair well with saturation pedals which sounds great.

Les Paul USA features Burstbucker 61R (Zebra) as the neck pickup, and a 61T for the bridge.

PRS SE Custom features 1 Tone and 1 Volume control with a 3-way selector switch. The quality of these was infallible. They felt sturdy and had a good response as they were turned, with a deep range of settings.

Traditionally the Les Paul features a separate Tone Knob and Volume Knob for each pickup. This gives more flexibility over sound options compared to a PRS.

There is a substantial amount of difference between the hardware used. Gibson tends to favor more expensive hardware, without cutting any corners. PRS’s hardware is generally fantastic, but with slightly less attention to detail than Gibson counterparts.

PRS guitars use PRS SE tuners, which are still excellent machine heads. They do not have a locking feature like Gibson but still hold their tune better than most guitars. They certainly use pro-grade tuning mechanisms.

The PRS SE 22 usually comes with a PRS-Designed tremolo system, these are great, although not as accurate as Gibson.

Depending on the model, many Gibson guitars contain a Whammy mechanism. Some models do, some don’t. Whammy models usually cost a little extra.

Some Les Paul models use a hardtail ABR-1 Tune-O-Matic bridge with an Aluminium stop bar tailpiece. These hold their tuning excellently, but do not have a tremolo arm. Most Gibsons have support for upgrading their bridges to whammy variations

The quality of hardware material is largely similar between manufacturers. Both favor Nickel-plated hardware alloys. We’ve never had issues with either brand’s hardware components.

Tone-wise, these guitars have a large amount of difference. Both manufacturers produce guitars that sound great. These are pro-grade instruments, with a sound worthy of stage performance, or studio recording. These instruments have been designed in a way to be competitive enough for stadium gigs.

Both manufacturers approach to sound with a different motivation.

Gibson guitars are known to be the best guitars with heavier amp settings. The Les Paul model has a particular sound. The Les Paul sound is one of the most sought-after tones and has been made iconic by many great albums and guitar solos.

Gibsons have a slightly more aggressive sound. They use warmer, richer pickups with more weight in the low frequencies. They have a brilliant percussive attack and a long, gradual decay. They’re perfect for making chunky rhythm tones, or searing solo sounds.

PRS Guitars have a different approach. PRS guitars sound much thinner. They are still rich and harmonic but focussed more on the mid and upper ranges. They have a better clean tone than Gibsons, sounding fantastic plugged straight into an amp with basic settings.

PRS may be more suited to the lead guitar position, thanks to its increased clarity and presence.

Tone-wise, both guitars are fantastic and provide a tonne of interest and excitement for the player and their audience.

The deciding factor will come down to your personal preference. If you prefer brighter, more piercing tones, then a PRS may be best. If you prefer warmer, fatter tones, a Gibson might be the best pick

Are PRS guitars better than a Gibson Les Paul? 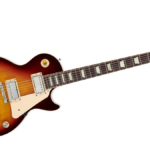 Both these brands have a range of instruments, both with superior and inferior models.

There are many different Gibson Les Paul models, in different price categories.
For instance, the PRS Custom, their flagship guitar, is less than half the price of a Gibson Les Paul. Although many people say Gibson guitars are overpriced, and better quality can be achieved for less.

Les Pauls may be traditionally better suited for rhythm guitars thanks to their warm tone, in comparison to PRS. But often they are used as lead guitars too.
The brighter PRS tone is better for lead guitar, as it cuts above the mix more clearly.

Are Paul Reed Smith guitars worth the money?

PRS makes very high-quality instruments. These are truly professional grades, and every penny spent becomes a valuable investment. The difference in quality compared to a more expensive guitar will not be hugely noticeable. The next step up would be a handmade, custom-designed instrument. Or guitars from a manufacturer’s premium range.

What genres are PRS electric guitars good for? 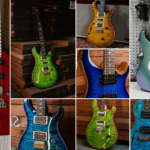 PRS guitars can suit any genre really, it depends on how it’s played. Although typically they are used in Rock Metal, and Latin. The most iconic PRS guitar player is probably Carlos Santana.

Ultimately, any guitar can sound like any other guitar, almost… Thanks to guitar amp and guitar tone simulation technology, most guitar sounds can be recreated. This is a relatively new technology that not many people know about.

Without using this kind of digital wizardry, a PRS can sound closer to a Les Paul than a Fender Stratocaster or Telecaster. Although the tone of a PRS is generally much brighter and thinner than a Les Paul

A Gibson Les Paul would be a great guitar for a beginner if they can justify, or even afford the price tag. Most Gibson Les Paul models cost $1000 plus, so the beginner will need to be extremely confident in their commitment to the guitar before dropping the additional cost.

An Epiphone Les Paul would be a great more affordable option for beginners.

This concludes our comparison of PRS vs Gibson.

My final assessments are that both manufactures produce brilliant instruments. It’s not a case of “which one is best”, they both have strengths and weaknesses over each other. Each one has different use cases where they may perform stronger.

Gibsons are great for heavier music, with a focus on distortion, gain, and warmth. They are chunkier in look and sometimes feel, but also sound. Gibson models tend to be more expensive than PRS guitars, which some people claim isn’t justified. Although there are PRS models that match the high prices.

PRS models suit a different style of player. These are slicker, maybe more melodically focused than harmonic. PRS feel and play very smoothly, and sound as sexy as they look.

If I had to choose one, I think I would pick Gibson Les Paul Custom as my only guitar, purely for their heritage in the guitar world.

Gibson has been making guitars for over 100 years, so you’d expect them to know what they are doing!

Coated Vs Uncoated Guitar Strings: Which One is Right for You?