On today’s guitar battlefield, we have two beginner guitar ranges going head to head in a battle for guitar superiority – Squier Bullet vs Affinity.

Squire is a partner company to Fender, which designs many of its guitars. Squire models are more affordable compared to their high-end Fender counterparts.

We put these ranges in the spotlight to find out which has the best electric guitar.

For more guitar shootouts, check out our PRS vs Gibson comparison.

For the most part, these ranges are very similar. The features are mostly identical between models, we found the main differences were in component and build quality.

The Squier Affinity range has a higher price because it uses superior parts. This results in a better sound and feel.

The Squier Bullet range still features some great instruments, but at a lower cost. A Bullet guitar will be a better pick for players on a tight budget.

Keep reading for our in-depth comparative analysis of these Squire guitar ranges.

Interested in hollow-body guitars? Check out our review of the Ibanez AS73 Artcore.

When comparing 2 similar models, the Bullet Stratocaster, and the Affinity Stratocaster , the contrast quickly becomes clear.

There are several key differences between Affinity and Bullet guitars:

There is some difference in the variety of models available in each range:

The Affinity Telecaster and Jazzmaster models are some of our favorite beginner guitars.

Humbucker models respond better to distortion than single coils and have a warmer tone.

Hardtail versions have fixed bridges without a tremolo system.

This table compares key specifications between the Squire Affinity Stratocaster and the Squier Bullet Stratocaster.

Below we break down each feature in detail, comparing a Bullet Stratocaster HT with an Affinity Strat.

The Affinity sounded great from the get-go, both the SSS or HSS models had a very flexible and clear sound.

Only experienced professionals would be able to tell the difference between this and a Fender. The tremolo arm worked well and could pitch bend over an octave.

The electronic circuit provides a large amount of tonal variation and the single-coil pickups had a great twang to them.

The Bullet has a balanced sound but didn’t quite compete with the Affinity.

The ceramic pickups lacked some clarity and warmth in comparison but still made a decent Squier Strat sound.

There is still a fair range of different tones available from the electronics, but it’s not as broad vs Affinity. The Bullet Stratsl also lacks a tremolo system. So no crazy pitch bending!

Overall the Affinity had a better sound with higher quality pickups, but it wasn’t a major difference. Most people wouldn’t notice.

Both guitars have a sound that could work with a wide variety of music styles.

Despite the low price Affinity strat uses decent quality materials. The bolt-on neck joint felt very sturdy, there were no signs of weak glue or loose screws. The wood feels very solid, and the electronics are not loose or showing signs of connection issues. The bridge, tuning pegs, and other metallic hardware felt like they were made from good quality materials. This guitar will last a long time if it’s looked after properly.

The Bullet series Strat, whilst still fairly good quality, was lacking in some areas compared to the Affinity. The Bullet displayed some inconsistent build quality compared to better guitars.

Whilst the neck joint, and body felt like a similar build quality, there were some weaker areas.

Bullet models can be inconsistent at times, occasionally with imperfect necks which need adjustment. The Electronics felt a little stiffer and flimsier than the affinity model. From experience, some elements do come loose after a while.

Round 3: Size, Shape, and feel

The affinity is full-sized, with a relatively lightweight body. Suitable for beginners and adults. The affinity doesn’t feel cheap. It’s fractionally thinner than the Bullet range. Also, the Affinity’s guitar’s headstock is larger, with a smoother feeling fretboard.

The affinity neck is comfortable with its C-shaped neck profile, the Laurel or Maple 21 fret fretboard feels very smooth and playable. With a gloss neck finish, the Affinity neck is great for beginners.

The Bullet Comes in slightly heavier than the Affinity, with a nearly identical body shape. The fretboard is also 21 and Laurel only. The neck is C-shaped, feeling very similar to the Affinity but a little clunkier. I noticed some scratchiness on the Bullets frets that interfered with pitch bends.

On both guitars, there were some sharp edges on the frets which may need filing down. This isn’t ideal for beginners but is an unfortunately common issue on many low-cost guitars.

The Affinity series electronic controls, switches, and knobs felt more solid than the Bullet. The Bullet had slightly cheap switches, although this isn’t a massive issue for most guitarists.

There are adjustment screws for intonation which can fine-tune the sound.

The logo and headstock designs are also different. The Bullet model is more basic, all in black. The affinity is embellished with gold. The Bullet had a small headstock in comparison.

Are Squier Guitars Any Good? 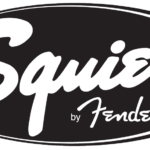 Squire guitars are actually very good guitars, particularly for the price. Squire is owned by Fender Musical Instruments Corporation, so their high standards are still maintained.

Squires are recommended for beginners as they feature fantastic quality, sound, and durability, at a reduced price.

Squire doesn’t only make “budget Fender brands”, they also have a number of their own unique models.

Squire often have a higher quality than budget guitars in a similar price range. Thanks to Fender and Squires’s longstanding history of production, they can afford lower production costs and higher quality.

Should I get a Squier or fender electric guitar?

In an ideal world, you should get a Fender Electric guitar.

Fender guitars tend to have superior quality, better woods, and more detailed craftsmanship.
However, Fender guitars usually cost around 10x the price of a Squire version of the same model, so it’s not a realistic choice for everybody.

If you are a beginner I recommend looking at Squier guitars first. Buy a Squier guitar, play it for a couple of years whilst you learn, then save up for a Fender when you are serious.

If you can afford to splash the cash, then why not. Learning on a Fender would be great.
For professional guitarists, a Fender is a worthy investment. Most pros play Fenders or guitars in a similar quality range. These have a much better sound quality which can handle stadium performances and high-fidelity studio recording.

Is it worth upgrading a Squier Bullet?

Some players may consider upgrading parts of their Squier Bullet.

It depends on how expensive the upgrades are going to cost. If it costs more than the price of a new guitar, it’s probably not worth it.

Common parts which are replaced are the pickups, tuning pegs, and bridge or tremolo system.
All of these parts are worth upgrading if you want to, good quality replacements can be picked up fairly cheaply.

Tuning pegs and bridges are easy to replace. Swapping better quality pickups and electronics is easy if you know what you’re doing. It requires soldering experience and knowledge of electronic circuits.

If you couldn’t upgrade it yourself, for a Bullet series it’s not worth paying someone to upgrade it. You’re better off buying a new, more expensive guitar.

How much does a Squier affinity guitar weigh?

There is a slight variation between the weights of different models in the Affinity guitar range.
Squier Affinity Guitar Weights:
Stratocaster: 8.82 Pounds / 4kg
No products found.: 9.9 Pounds / 4.5kg
Starcaster:  11 Pounds / 4.9kg
The affinity Telecaster comes in between the Starcaster and Stratocaster in weights, with the strat being the lightest.

It’s a close competition between these two Squire Strat guitars.

Overall I preferred the Squire Affinity range. They are just that extra step above Bullet Strats, for both sound, feel, and build quality.

The Affinity felt better refined and more crafted. As far as a Squier Strat goes, the Affinity is one of the better pieces.

I would only recommend choosing the Bullet over the Affinity if you were on a limited budget. The lower price is the only thing the Bullet wins on.

Although the Squire Bullet Pros were a closer contender.

Either way, they both make great guitars for beginners and have a versatile feel that suits most playing styles.

These Squire Strat models are an ideal first guitar for beginners and children.

There are also many other great Squire guitars Including the Squier Contemporary range, Squier Affinity Pros. This was all to discuss about squier bullet vs affinity. ta-ta!

Coated Vs Uncoated Guitar Strings: Which One is Right for You?