Previously, we took a look at some great choices from Røde Microphones for those looking for quality recordings at the ~$200 price range.

While $200 for a mic isn’t steep by any means, I’m sure there are many people looking to save a couple bucks without sacrificing quality. After all, we are musicians.

Audio-Technica is Japanese audio equipment manufacturer with a lot of history. Founded in 1962, the company has been popular for its competitively priced products. Notable examples include the ATH-M50 (and M50x) monitoring headphones and the AT20-series condenser microphones.
As mentioned in the previous article, microphone quality will seldom affect your ability to create. These days, you can really make anything sound good, and on the other side of the spectrum, you can make anything sound bad. So, when looking at these two mics, let’s keep that in mind, and focus on the specs and features that they provide.

The AT2020 is Audio-Technica’s entry-level condenser mic. With the $99 price tag, it’s great for anyone looking to add to their home studio without paying hundreds of dollars. It should be noted that this mic does require an audio interface. If you have a home studio, you likely already have one of these, but if you’re just starting out, or for some reason are lacking one, the USB version is a good alternative as well. 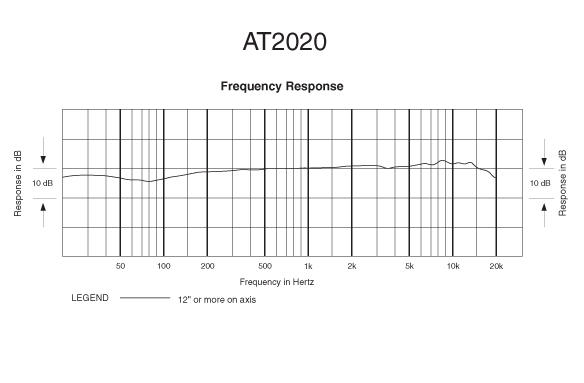 The frequency response of the AT2020 is relatively flat, with slight cuts around the 70-80Hz mark, and a boost on the high end for added clarity. The standalone version comes with a pivoting stand mount, compatible with most microphone stands. The bundle includes a pop filter to cover your annoying habit of emphasizing your Ps and Ss — it’s ok, we all do it. It also comes with a convenient 20ft XLR cable.

The cardioid polar pattern is going to reduce pickup of sounds from the side and the rear, helping with sound isolation. However, it is still a condenser microphone, so if your workspace creates a lot of natural reverb, maybe a dynamic mic would be a better choice.

A quick run down of this mic is that it’s a fairly standard entry-level condenser mic, with a flat response curve and basic features. Its strengths lie in its pricing and build quality.

The AT2035 is the big brother to its cheaper counterpart. They look quite similar, but the 2035 includes some features that you may or may not find useful. Paying a $50 premium, you’re getting a similar quality mic, but with a switchable 80Hz high-pass filter and 10dB pad.

The above image should help you visualize what the switch does. Essentially, it gives you the option of cutting low-end frequencies, which is helpful for when recording vocals or other sounds that don’t necessarily require that it.

While the switch is a thoughtful addition, it’s really nothing you can’t do yourself. However, if you are someone who is frequently recording a variety of sounds, including those that require low-end, then it can be useful for quick switching.

Other than that, the 2035 is hardly any different than its cheaper counterpart. It does come with a shock mount, as opposed to the 2020’s stand mount, so that might be a point of interest.

So, you’re left between two options that are quite similar. They both offer similar levels of quality in both sound and build, and are both competitively priced. With just $50 separating the two, I recommend choosing based on your current setup.

If you lack any equipment at all, go with the current AT2020 bundle. With the pop filter and XLR included, it’s a good way to get your gear set up. Look for a cheap interface, like the Scarlett 2i2 and you can get started.

If you are someone who is recording a lot of different sounds, and you want a cheap mic with a switchable filter, go with the AT2035. You’re paying $50 more, but you get a standard shock mount, as well as the convenience of the switch and pad.

Or if neither of these options appeal to you, maybe check out some Røde Microphones. However, this is all mostly preference, as entry-level mics are really what you make of them. You can’t really go wrong with any of these starting out, and if you do find yourself unsatisfied, you likely will want to look at the next tier anyways.

What is a MIDI Keyboard?