In the untethered world of recording the best portable audio interfaces come from big names and unexpected ones too.

A good audio interface is generally the first step in realizing a song after the songwriting process has concluded. The way an interface translates the fidelity of a mic with its internal preamps can drastically change the sound quality of a recording. In the recent years of more and more powerful recording systems being put in much smaller packages, it was only a matter of time before that small pack was able to fit in your back pocket.

In this collection of the best portable audio interfaces, there are only 3 rules. Rule one is that the price point should be realistic for the sound quality provided. Rule number two is that the build quality should be that which you could actually take on the road. The third rule, which will only be broken once,  is that this has to be truly portable, meaning that you can take use it with all of your devices from your desktop to your iPhone. 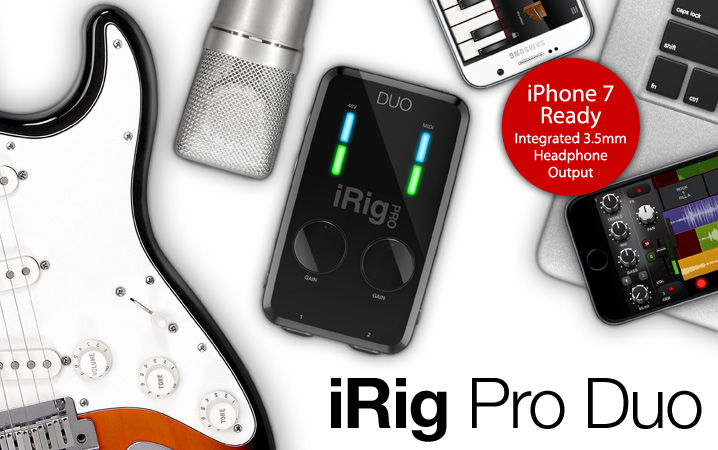 Innovators of the iPad as an instrument category with their flagship iRig line, IK Multimedia is always at the forefront of music-related iOS peripherals. The iRig Pro Duo is the third in the line of iRig recording devices and is the most powerful of the set. With 2 combo servo-balanced inputs, phantom power, a 24-bit AD-DA converter, and MIDI capabilities that can all be powered by two AA batteries the iRig Pro Duo is the best portable audio interface for any iOS device.

For Mac or PC users have access to AmpliTube Metal with the Custom Shop expansion, T-RackS Classic, Sample Tank 3 SE with 2 special expansions and 25 free Gear Credits to use in the Custom Shop.

Presonus has been making compact audio interfaces for nearly a decade now, and while most probably hoped that an iOS-ready version of the Scarlett would have been their first truly portable audio interface, that wish has yet to be granted. While hopefuls pray for an iOS compatible Scarlett Presonus fans still have a quality interface in the companies Audio Box iTwo.

As the name suggest the Audio Box iTwo is a dual-input audio interface that works with iOS and desktop devices alike. As the first portable audio interface on the list that is completely bus powered it only supports iPads and laptop or larger computers one might question what makes this special, so let’s jump to its features.

The original Apogee Duet was the first truly portable audio interface, and the interface that every audio engineering student wanted to get while getting their degree or certifications. Created in a partnership with Apple in their foray into the world of music making, the Apogee Duet is for Apple users only (sorry PC people). The original Apogee Duet was a metal block with a knob and a proprietary set of dongles inputs that used an innumerable amount of pins.

Apogees second go at creating a new and improved Duet left many users questioning the high-fidelity recording company by switching over to USB and a plastic build for the new edition that looked equally parts futuristic and cheaper. In the end, the addition of the assignable touchpads allowing users to activate control surface like options pushed the Duet to the forefront of its .competition. In its debut, the Duet was the best portable audio interface on the market, now it’s the most popular portable audio face in the world for Apple users.

Universal Audio is one of the biggest names in pro audio, their UAD plugins are some of the best in the world, and their DSP chips have won them literal [technology] Grammys. When moving into the world of prosumer interfaces, they really held nothing back. The Apollo Twin, their exploration into the world of portable audio interfaces isn’t really meant to go anywhere but your studio, but they understand the ever-growing world of iProducers.

The quad core Apollo Twin MKII is both compact and powerful, and as the world’s most popular professional desktop recording interface it is the gold standard that everyone should know. Including two of UA’s Unison-enabled mic preamps (which allow SSL, Neve, API and Manley preamp emulations), and the AD-DA converters from the larger Apollo 8 this is the highest-fidelity portable audio interface on the list. As a bonus, the Apollo Twin comes with a host of UA’s plugin emulations that can run from the DSP provided by the Apollo Twin MKII itself.

The least known interface of the set is the RME Babyface. The RME Babyface is the kid brother of the RME Multiface, and as portable audio interfaces go, it’s the full package and allows for high-fidelity recording on any device. The Babyface has a slick ergonomic design and has a monster of computing and conversion power inside. With a melding of some of RME’s best pieces, the Babyface is a low-latency interface, with their custom TotalMix FX which allows for DSP-based effects that are included with the interface.