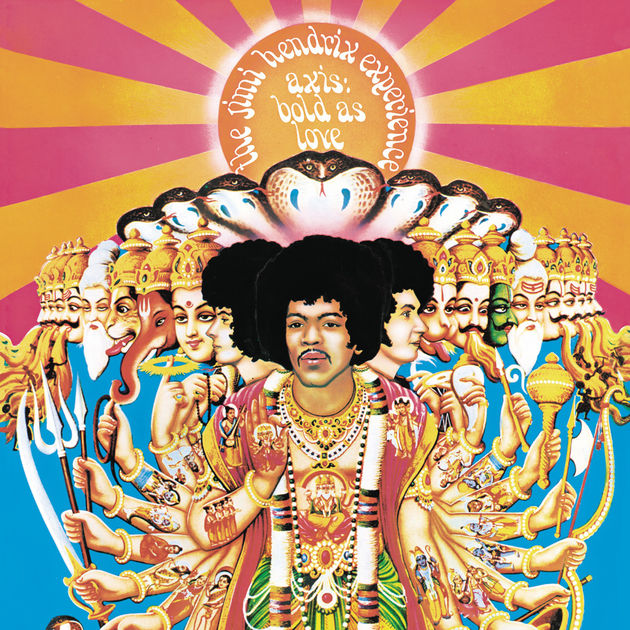 On this day in 1967 the album “Axis: Bold As Love” was released in the U.K. The contractual follow up of “Are You Experienced” was specifically geared toward the psychedelic sound Jimi was known for and studio experimentalism at the time. “Axis: Bold As Love” was recorded in London at Olympic Studios where studios and sound engineering was considered much more advanced than the US. Jimi Hendrix, Chas Chandler, Eddie Kramer, and George Chkiantz recorded on odd hours around Jimi’s busy schedule following the “Are You Experienced” album.

The group wanted to use this album to push themselves creatively in the studio which is why much of the music heard on this album was never performed live. They were known to records 7 to 10 songs in an evening, most were never released. The album needed to be released within 1967 but almost didn’t make the cut according to the book No products found., Hendrix apparently left the side one master LP in a London taxi. The band pushed through this hiccup and recorded every day in October.

This album is known to be the “strangest” album the group ever recorded. Jimi wanted to use instruments he had never played before like the harpsichord which can be heard on “The Burning of the Midnight Lamp” and even played a recorder on a few tracks.

Some songs were recorded dozens of times due to Hendrix’s perfectionism and ultimately never made the album. This album is where Hendrix had really hit his stride in his behind the board proficiency. “You”ve Got Me Floatin” where Hendrix opens with a backward guitar solo, “Little Wing” he played his guitar through a Leslie speaker which is a rotating speaker used in organs that whirled his melodies through your ears. Every track had a recording innovation that hadn’t been heard before.

This was such a time in music history due to the legends who have set the precedent for all artists in modern music. Hendrix and his team showed the world what technology in music could really do.

Financial Resources for Musicians During The Coronavirus Outbreak