Fender isn’t well-known for being a great metal guitar, but its versatility might still surprise you. As the first company to make a mass-produced, solid body guitar, Fender knows what it’s doing. Keep reading article to learn about the best fender guitar for metal

Even though people use them for blues and softer genres, many Fender guitars are excellent metal picks. I looked at seven different Fender guitars and found the Jim Root Jazzmaster to be the best one.

We’ve tested many kinds of guitars and musical equipment for all sorts of music genres. I’ve played guitar in various bands, and been active in the industry for about 15 years.

The Jazzmaster is spectacular. After all, Jim Root, whom the guitar is named after, is the guitar player for Slipknot.

Some guitars are just better at certain things or have superior features; Fender electric guitars are no exception. Because of that, I added a few “best for” cases to see which ones are best in multiple categories.

Keep reading if you want to learn more about the best Fender guitars for metal. We also have more information about the best metal guitars. Additionally, we can tell you what the best Schecter guitar is.

Best Fender Guitar For Metal in Our Tests

The uninitiated might not understand why something called a “Jazzmaster” is our number one pick. It deviates drastically from the classic Fender design, making it one of the most extreme-looking guitars Fender has produced. Even so, they’re one of the best-selling signature guitars that Fender has made.

Out of all of the Fender guitars made, the Fender Jim Root Jazzmaster is the most geared towards metal because it has the most metal-centric gear. Fender only makes some of these features for this model.

The great thing about the Jim Root line is that each guitar, the Jazzmaster, Telecaster, and Stratocaster, has the same basic features. It has a mahogany body, a maple neck, ebony fretboard, and a 70s style headstock.

The 22 jumbo frets are more likely to be on an Ibanez metal guitar. They’re perfect for this neck, though, because it’s flatter than usual. That makes this electric guitar ideal for shredding.

You’ll also get EMG pickups that are wired to just a single volume knob. One of them is an 81, and the other is a 60. The 81 is a classic metal design constructed for higher gain, while the EMG 60 is excellent for fast leads and cleaner sounds. This machine is perfect for heavy metal in particular and can definitely feature in your list as well for best fender guitar for metal.

Tom Morello from Rage Against the Machine and Audioslave created this guitar in collaboration with Fender. It’s based on his guitar, “Soul Power,” which is an iconic guitar. Morello is a legendary rhythm player, but he’s also excellent at leads and can even create scratch sounds with his instrument. His famous guitar is a perfect example of Fender guitars and the Fender Stratocaster excelling at metal music.

Like the other Stratocaster, this one features a maple neck, an alder body, and a rosewood fretboard. This electric guitar also features a Floyd Rose Trem, which is excellent because, unlike other tremolos, this one doesn’t detune the guitar as much.

You’ll also get an insane pickup combination with this electric guitar. A Seymour Duncan Hot Rail pickup near the bridge acts like a humbucker, perfect for super heavy chugging. It also gets metal guitarists high gain lead tones. You also get two Duncan single coils, similar to the HSS. These can be played in just about any style.

Even though the Series HSS might not look like much, it can handle quite a lot of metal music. Even heavy bands like Iron Maiden have tested out this guitar. It’s versatile and takes decently well to high gain and volume. If you play metal, this guitar is a great Fender for you. Like most Fenders, it’s an iconic guitar in looks and sound alike.

This guitar’s body is made of alder and it features a beautiful maple neck. On top of the neck sits a Pau Ferro fretboard, which has 22 frets and dots to mark them.

As for pickups, this Strat has three single coil pickups, which are ideal when you’re playing clean riffs. If your sound is a bit too noisy, you can flip to the bridge position, which will get rid of any hum that the coils produce. Also, traditionally, the bridge is the best position for chugging through riffs. That’s a huge reason it’s one of the best guitars for metal.

You can still use the single coil pickups with your amp’s clean channel. They’re bright and clear, making them effective for recording clean parts of songs.

Another guitar of Iron Maiden fame, this Fender Stratocaster is an excellent choice that’s a bit similar to the HSS I discussed. Its body is made of alder wood, and it has a maple neck with a rosewood fretboard and 21 frets.

This electric guitar features two Seymour Duncan Hot Rails on the bridge and neck, as well as a Seymour Duncan JB Jr. For tone controls, this Stratocaster has a volume knob, two tone knobs, and a five-way switch. It also features a Floyd Rose double-locking tremolo.

You’ll get a versatile set of sounds with a more classy aesthetic. Although this guitar has a tone geared more toward classic rock, the two Seymour Duncan pickups in the bridge and neck, combined with the JB Jr, gives the instrument plenty of metal power.

The guitar is capable of beautiful harmonics and squealing solos. It can also deliver crunch and scream, as well as top-quality vibrato. Although not cheap, it’s an excellent option for any metal guitar player.

This guitar is a little different from the classic Fender guitars I’ve talked about already, but it’s also one of the top guitars for metal. When you think about a Telecaster, you probably think of more indie or alternative bands instead of metal ones, but the Jim Root edition changes that. It’s a little bit like the Jim Root Jazzmaster I talked about.

This guitar also has a mahogany body, maple neck, and an ebony fretboard, just like the Jazzmaster. It also has jumbo frets and a hard-tail bridge. It’s a rear-routed guitar, but it still has a pickguard. This Telecaster features active EMG pickups, with an EMG 81 for a bridge pickup and an EMG 60 for the neck.

The result of all of this is a massive sound that’s perfect for heavy music. It doesn’t have a tremolo, but that’s not a priority for every metal guitar player. 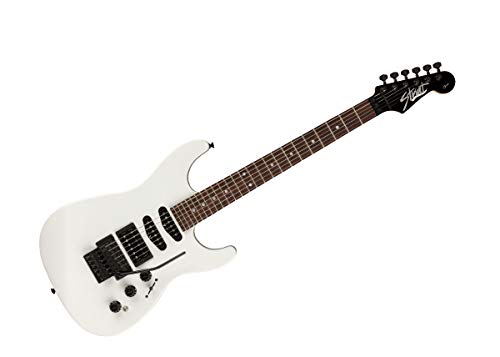 This incredibly brightly-colored guitar is a blast from the past that might help direct your playing towards 1980s shredding. Fender recently re-released these iconic guitars, but it remains pretty rare.

The difference between the original Strat and the new one is that the reissue has custom-voiced high-gain humbuckers with two single coil pickups. It also has a new Floyd Rose Special tremolo that replaced the older version.

The body is basswood and contoured with a bolt-on maple neck and either a maple or rosewood fingerboard. It has 24 jumbo frets and a C-shaped neck that’s finished with satin urethane. The neck helps set up extreme bends. It has two tone control knobs and one volume knob, as well as a five-way selector switch.

This guitar shreds. The control set is within reach of your hand, and they’re tall and rubberized, so you can easily change them when playing. The older model was a little twitchy, but this one can dive-bomb aggressively, and the tremolo gives you total control over it.

This is the final product I’m going to talk about today, and its last place on the list doesn’t mean it isn’t a good guitar for metal music—the other ones are just better.

During the 70s, Fender guitars had quality control problems, but that didn’t stop this one from catching on. After all, Keith Richards of The Rolling Stones made this instrument famous.

This guitar’s body is alder, with a maple, C-shaped neck and maple fingerboard with 21 frets. The pickups on it are less geared towards metal, but they’re still excellent pickups. You’ll get a Fender Vintage-Style 70s single coil for the bridge pickup and a Fender Wide Range humbucker for the neck.

Fender made this guitar like the older versions. It sports a 7.25″ fingerboard radius, meaning that it’s great for power chords. Some players may not like playing above the 12th fret on this instrument, but that doesn’t stop it from packing as much power as it does.

When looking for an electric, there are a few things to keep in mind. More expensive guitars are generally better overall, but there are a few cheaper ones you can find. Before going out to look for one, though, do research and find out how much you want to spend.

Testing the features you want is always a good idea, regardless of the type of guitar you’re buying. Fender guitars, especially the more expensive ones, usually have a lot of features. Some will have master tone knobs, some have jumbo frets, and some Fender guitars have great whammy bars.

The more features you want, the more expensive the guitar will probably be. That’s part of the reason Fender guitars can be as expensive as they are. You may need to spend more money than you initially thought to get the right features. Even things like better single coils or a case will cost you more.

A new guitar shouldn’t have many problems, but it might, especially if you buy it online. That’s why it’s always a good idea to test the instrument before you commit to it. If you’re buying an expensive guitar online, make sure that the website has a decent return policy if you need to return it.

When you look at a new guitar in person, check out the pickups, nut, bridge, and anything else that touches the strings. Those are the primary sources of sound—if something even lightly touches a string, you’ll get buzz. Fender guitars can sometimes be buzzy, so you might need to change the strings or move something.

Are Fender Guitars Good for Metal?

Yes, Fender guitars are great instruments for metal, but you’ll need to do a bit of research before buying one. Not all of them are suitable for heavy music.

Yes, they can be. It depends on what you want out for your sound. Most of the guitars I talked about here are around $1,000 or more.

Out of all of the guitars tested, the Jazzmaster is the best one. It’s excellent all around. It can handle any music, but it excels with metal music. If you’re considering buying one, definitely go for it.

The Best Martin Guitar For The Money

The Best Martin Guitar Under $1000

The Best Martin Guitar Under $2000

The Best Martin Guitar for Fingerstyle